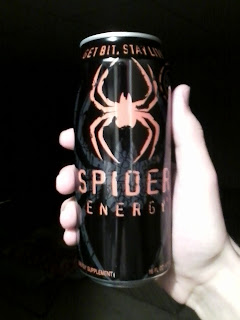 It seems that the more I drink and review energy drinks, the less often it is that I find anything that’s actually worth getting excited about.  Especially lately, it seems I have been able to go through entire company lines and have not found a single noteworthy drink in the lot—after a while, this does get a little disheartening.

None of this applies to my new acquisition, Spider Energy.  This is a drink (spoiler alert) that has everything going for it—low price, killer packaging, excellent taste, and a buzz that’s hard to match.  Such is my enthusiasm for it that—if you know of a place where you can get Spider nearby—I would wholeheartedly encourage you to take a break from the reading of this review to buy a can, then come back and finish reading.  Assuming that 1) you’re just going to keep reading regardless of my recommendation, or 2) have taken my advice and are happily in the process of imbibing a can of Spider Energy, I am now going to proceed with the review itself.

My one complaint about Spider Energy—in my experience, it’s been hard to come by.  The four flavors I found I happened across at a gas station in La Grande, Oregon; if I’m going to love this energy drink, I would love to be able to actually find it nearby.

The packaging on Spider Energy is pretty wicked—I mean, just look at it.  A good deal of energy drinks go for the whole EXTREME look—hardcore imagery, grunge fonts…you know what I’m talking about.  In any case, this sometimes work, but oftentimes energy drink companies go overboard—with results that look ridiculous.  Not so with Spider here—it seems that they managed to put just the right amount of hardcore in here, and as a result, this sucker actually looks pretty dang formidable.

And—believe it or not—Spider Energy is actually a bargain energy drink.  That’s right—got a suggested retail stamp of 99 cents on there.  And—again, believe it or not—the stamp actually doesn’t take away from the overall appearance.  Compare the Spider Energy suggested retail stamp to the dollar store-esque sunburst that disgraces Knockout Energy’s can—amazing what a little effort can do, isn’t it?

Now, after that little revelation about Spider being a bargain, energy drink, I know what you’re thinking, because I was thinking the same thing—the drink looks nice.  It’s got my hopes up, but it is a bargain energy drink.  It’s got to tank somehow, right?  This is going to be a Red Bull clone or something like that, something uninspired and distinctly lacking in the palpability department?

Nope.  Spider has nailed their original flavor here—which is orange.  It’s hard for me to place my finger why I like it so dang much—it’s not an honest-to-goodness orange drink, so it doesn’t have anything after the tradition of Viso going for it, but it’s not out there in the orange soda realm, either.

It’s just…good.  The orange flavor, though obviously not orange juice, isn’t fake or chemical-esque.  There’s no heaviness of high-fructose corn syrup (they use actual sugar here), or any bitter aftertastes.  To wrap this section of the review up, I’m going to say it’s like they canned likability, and it turns out that tastes like orange.

So the flavor’s good but…how does the kick hold up?  Does Spider fall into the typical bargain energy drink trend of supplying either a good taste or a good kick?

Nah, you’ve got both here.  Spider, with its whopping 240 mg of caffeine (a record in a bargain energy drink), delivers a pretty serious kick.  But at the same time, it’s a really nice level of energy to find one’s self at—however intense, it’s not the sort of thing to get you incredibly jittery, leaning towards providing extreme alertness and significantly heightened functionality rather than wasting it’s caffeine on wanton buzzing.

Keeps you going for a while, also—five hours by my watch.  No crash to report.

Spider Energy is a great energy drink.  It is seriously something I could see myself buying by the case—and that’s not something I say very often.  If you can find it nearby, go out and grab a can or several (assuming you haven’t already, per my recommendation).  And if it isn’t readily available near you—don’t let that stop you.