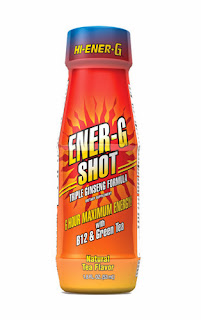 This, like the Red Rain energy shot I just reviewed, is a K-Mart acquisition.  K-Mart being the (wholly undeservedly) nigh-omnipresent chain that it is, you should have no difficulty finding this—unless supply varies from chain to chain.  I don’t make it a habit to explore K-Marts outside of my own, so I have no idea if that’s the case or not.

The main aesthetic appeal of this shot is that it looks different—and by different, I mean it’s not an obvious 5 Hour clone.  The tall bottle and rich colors are a nice change from the norm; my only complaints are 1) the failure of the company to disclose the caffeine contents of the shots, 2) the incredibly ridiculous name/cheesy misspelling of that name, and 3) the shrink-wrapping job on my bottle—it doubles over in front, distorting the logo.  Kind of tacky when a company is that careless about the bottling of their product, isn’t it?

I was pleasantly surprised to see in my last trip to K-Mart that this product had been marked down—from $5.99 to a mere $2.95 for a pack of three.  I saw it as an opportunity to get my hands on some inexpensive energy that I hadn’t even gotten around to reviewing—as it turns out, however, I should have taken it as a warning.

Hi Ener-G is one of the nauseating things I have ever had the displeasure of gagging down.  Ever been to an elderly couple’s house, where the carpet and furniture have been around since the early 1960’s an haven’t been deep-cleaned in at least two decades, and everything is rank with the musk of half a century of accumulation of dead skin cells and B.O.?  Well, now you have the once-in-a-lifetime opportunity to taste that—I say once, even though it’s sold in the 3-pack, because I can almost certainly guarantee you will never, ever in a million years want to do it again.

As far as which elements of the flavor are actually to blame, I’m going to point the finger at the tea flavoring (which is positively rancid) and the energy blend (which is excruciatingly bitter)—particularly the ginseng, which is not masked by the tea flavor as the product description on the website indicates it should be and leaves a hot, acrid sensation lingering in your mouth after you swallow that is as unpleasant as anything else out there.

Whatever the problematic agents, this stuff is foul almost beyond belief, and reason enough to avoid the product permanently.

All of the above is a pity, because the kick here is one of a superb energy shot.  When you’re in the throes of its effects, you really feel as though you’ve taken an energizing vitamin supplement rather than your run-of-the-mill energy shot, if that makes any sense.  If not—let’s just say that while the strength is only slightly above average, it is characterized by a general lack of harshness or heaviness that characterizes a number of other energy products, and feels good enough that I would return to the product again, were it not for the atrocious flavor.

Somewhere between three, three and a half hours.  No appreciable crash.

Make no mistake—this is a product that kicks well enough that I’m sure the company meant well when they formulated it.  Problem is I cannot in good conscious recommend it—it tastes like some sort of poison or emetic, and no excellence in quality or quantity of kick ever begin to make up for that.