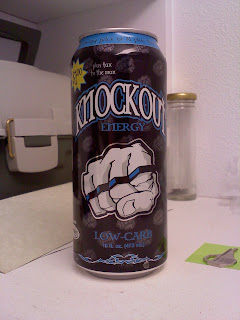 Knockout products are getting easier to find, though more often than not you still find them when you find yourself at a gas station in the middle of nowhere.

Knockout Energy has improved their appearance since I last reviewed one of their drinks—the illustrated fist with brass knuckles has received an upgrade, and rather than the flat black background, we get the black background with a multitude of evenly dispersed micro-fists.  So only a few things have been changed, but they are enough to represent a significant improvement in my book.

Think of the taste as sort of a Monster Energy Lo-Carb knockoff, except with less of a sucralose taste and more of a…host of other artificial sweeteners taste.  This isn’t the worst low carb drink I’ve ever had, but the next time Knockout decides to revamp their products as they did with the packaging, I’d suggest working on the sweetening blend here.

I’ve had plenty of drinks that kicked harder than Knockout Energy Low-Carb did, but to be perfectly fair, it was a step above the others of the line in terms of intensity.  Rather than being at the point where I could avoid falling asleep (as with the others), I actually felt reasonably alert at points.

I can’t say that Knockout Energy Low-Carb lasted as long as the other Knockout beverages, but…I can’t say that it didn’t last as long, either.  See, the other two were so weak in terms of intensity that I actually found it hard to gauge how long they lasted, and consequently gave them the benefit of the doubt, as I was able to avoid falling asleep for a time.  So in evaluating Knockout Energy Low-Carb, I’ll just say that you should plan on having about 2½ hours of efficacy before the effects wear off, and leave it at that.

Really, Knockout Energy Low-Carb isn’t terrible, but it isn't anything remarkable, or even noteworthy, either—in just about every area where it counts (except perhaps for price), just about all other comparable drinks (Monster Energy Low-Carb and Absolutely Zero, etc.) outperform it.  More than anything else, it’s just another drink to take up shelf space.  Unless you really have to try it, just bypass it.