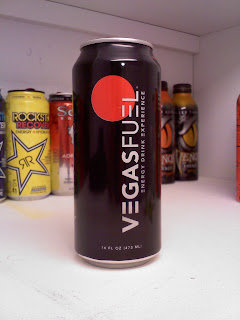 I’m guessing that this is a drink trying to inch it’s way into the market, because to date I’ve only seen it at one location (small grocery store in Buhl, Idaho).  If you’re interested, be prepared to look a while.

Sometimes, it seems, less is indeed more, and such is the case with the packaging of the Vegas Fuel energy drink.  It’s black background, dark red setting sun (?), and silver lettering is actually a good deal more eye catching than one would think.  Perfectly reminiscent of a night in Vegas, if you ask me.

The taste is very similar to Rockstar Punched—Tropical Fruit Punch, best described as tasting like mildly carbonated Hawaiian Punch.  As I stated in that earlier review, I am not at all a fan of this flavor, which to me tastes cheap and artificial.

I was actually quite surprised by how effective this drink was in delivering a needed boost, given the low level of caffeine compared to that possessed by competing energy drinks.  The experience was about halfway between very awake and jittery, a pleasant point to be at behind the wheel.

I’m going to venture a guess and surmise that the idea behind the drink was keeping one awake during a night in Vegas, and it wouldn’t surprise me if it were able to do just that.  It was a long time before I noticed any decrease in my energetic state, and by then the drive was long over.

I highly recommend this drink to anyone of the fruit punch persuasion, for this drink was designed for such.  Even if the flavor didn’t do much for me, the drink delivered as far as the kick is concerned, and anyone who likes the punch flavor should have nothing bad to say about it.