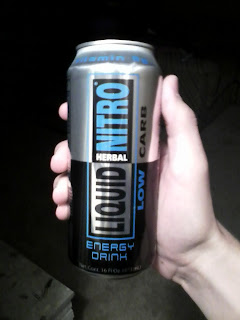 I’ve known of Liquid Nitro for a while, but I have not for the life of me been able to find it until recently, when I decided to stop by a random, out-of-the-way gas station.  Here on the Western side of the U.S., finding it’s a fluke.  Open question to readers: any of you live anywhere where it’s commonplace?

As with the original, I find the simplicity to convey a firm yet understated confidence that I find quite appealing—if you’re confident enough in your product that that you don’t need to shriek it out to get my attention, then I would say you’ve earned it.

I had the same experience with Liquid Nitro Low Carb as I did the original in that after I opened the can, I just stood there sniffing it for a minute or so before drinking it.  The smell is complex and very appealing—Red Bull clone to be sure, but much more delicate, and almost floral.  It’s so intriguing that it’s almost a letdown to find out that it’s your run-of-the-mill Red Bull clone, maybe with a hint or two of the herbs in the proprietary blend.  It’s better than most of the Wired Red Bull clones, but at the same time falls far, far short of what the scent led me to expect.

At least in terms of energy, Liquid Nitro Low Carb doesn’t disappoint.  In the 16 oz. size, it provides a very satisfactory degree of energy with only marginal jitters.

The effects lasted for the better part of three and a half hours, with only enough of a worn-out feeling after the fact to make me wonder whether I was crashing.

I have to say I was a little disappointed with Liquid Nitro Low Carb—and it’s all because of that dang scent.  It’s so intriguing, but in the end, it’s coming from something so standard that it’s really quite disheartening.  That said, the herb nuances I detected in the flavor will appeal to some people, even if I found that it didn’t fit with the Red Bull clone mold.  If you can get your hand on a can, try it at least once, and let me know your thoughts—I’m sure that the resulting diversity of opinions will prove interesting.