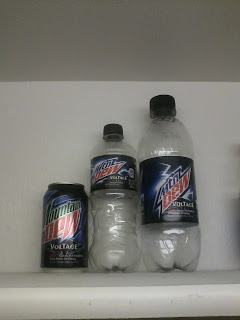 For those of you that have noticed the high volume of reviews I’ve been posting over the last couple of days—no, I haven’t been drinking all of these in a short period of time.  I’ve been behind on reviews for quite a while, and over the last couple of days my wife and kids have been out of town (etsy business) and I’ve had lots of time to study and clean.  But you can only study and clean so much, and I’ve been needing to occupy myself somehow, so I’ve been catching up on reviews.  This is the last one before I’m up to speed.

What is Mountain Dew—Voltage’s claim to energy drink-dom?  Ginseng.  Yes, they added ginseng to this formula, and many seem to be under the impression that this makes it a more energizing beverage, notwithstanding the fact that 1) ginseng is one of the last ingredients on the list and is probably contained in quantities so minute as to render it useless, and 2) Mountain Dew did not change the caffeine content one bit.

So in the end, you just get regular Dew with a pinch of ginseng and people go nuts. This really annoys me—if you’re going to make people think they’re going to get more out of your drink than they otherwise would, then for crying out loud, put a little effort into it!  It’s got me mad enough that I feel it is my duty as a review to dispel the myths, and declare that Voltage is not any more energizing than the regular.

Average for a Dew—has the usual quasi-XTREME thing going on that appeals to skaters and anyone into anything that could be considered XTREME…and yes, I’m a bit of a cynic when it comes to the Dew subculture.

I have a really hard time with the original Dew, just because it is so dang sweet.  I have the same problem with Voltage—and while I know that most products I’ve reviewed are little more than caffeinated sugar water, this stuff actually tastes the part like nothing else I’ve ever had.  I can handle the 12 oz. can alright if it’s on ice (and I think the blue raspberry is a good idea), but by the time I decided it was time to bite the bullet and drink the 32 oz. bottle, I thought I was going to hurl by the time I was finished.  I suppose that drinking the full two-liter monster that this comes in would have resulted in my hospitalization.  Bottom line is that Dew people are going to love it—but I just have a hard time finding any sort of appeal in it.

Incidentally, the reason I didn’t review the two-liter bottle of Pepsi Max or this is because it is just not practical for energy supplementation.  Can you imagine trying to down that much in one sitting? …if you can, then I would surmise that you’re also into skateboarding and posting videos on youtube of XTREME stunts.

Not a boost to speak of.

N/A—was too weak to begin with.

If you think you’re going to get a boost out of this size of Dew, you are either 1) 12 (which I don’t have a problem with, so please no nasty 12-year-old ‘I can swear and it makes me look tough’ types of comments on that, please), or 2) kidding yourself.

Perceptible, but weak.  Not enough here to recommend.

Umm…brief next to most beverages.  That’s as much as I can recall.  See how apathetic this drink makes me?

We’re up to 20 oz. now, which already gives us an alarming amount of sugar with little boost.  At this point, I became so scared of reviewing the 32 oz. bottle that I hardly looked in my closet—I swear that stupid fluorescent blue liquid was watching me every time I did, knowing that one day I would have to pick it up and review it.  I swore I heard it speaking the tongue of Mordor once or twice.

Here, you do get a boost—about average on the energy scale.  Couple that, however, with the supremely sluggish feeling you get out of all the HFCS you just took in, and you realize it’s just not worth it.  I swear for a few days after the fact all I did was take psyllium and jog….

So now we come to the conclusion of this review—this drink isn’t any more worth it than Mountain Dew.  It’s a feeble effort on part of the company, to be sure, and not something I have any plans on going back to or recommending.