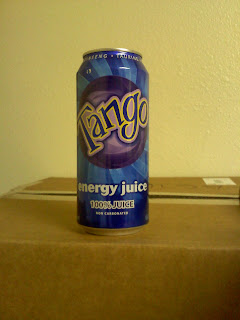 Rumba Energy Juice has 170 mg, so I believe that the same is true for Tango.

This is another drink I found at a grocery outlet—these are actually good places to hunt, if you’re looking to try drinks nobody’s talking about and write reviews that aren’t frequently read (at least compared to my Rockstar and Monster Energy reviews).  Anyway, it’s scarce stuff, so plan on looking for a while if your heart is really set on it.

To get this out of the way: I like the blue/purple combination.  I am not wild about the execution.  My biggest issue is the fact that it really doesn’t look like an energy drink—it looks almost like something you’d buy your kid to pack in his lunch and think you’re doing something good for him because it says “100% juice”.  I don’t feel insecure drinking such, but it does bother me that it could be so easily mistaken for a beverage for a much younger crowd if one is not careful (being a parent, I’m a little nervous about these things—sue me).

I’m guessing that this is supposed to be something grape-esque, and to a degree it is—but mostly, this tastes like apple juice (which seems to be a popular filler in most juice energy drinks) with Triaminic.  For being 100% juice, it doesn’t taste very convincing, and it’s far too sweet for my adult palate.

This drink irks me when it comes to intensity, because—not to be vulgar, but it’s sort of a cocktease sort of thing.  I hadn’t gone through half of the 16 oz. can before I was buzzing—about an 8 out of 10, and I was thinking, “FRICK!  This is going to be AWESOME!”  Anyway, that lasted only about 15 minutes, and then it was about a 7 out of 10, which lasted longer.  But getting me set up for more than making me settle for less…not cool.

Longevity was average—about 3 hours or so.  It did its job for the time being, but it was easy to get to bed when the time came.

I paid 25 cents for this drink, so I can’t really rage about the experience, but it one of the more lackluster drinks I’ve had.  If you can get it for 25 cents like I did, I suppose you could give it a shot, but otherwise just bypass it.