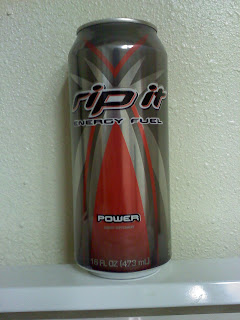 You can find Rip It at just about any bargain store, so you can expect it to be about as common as bargain stores as a whole.  Out here, they're pretty abundant, as is Rip It.

I’m having a really hard time finding anything to say about the packaging of this drink.  It elicits virtually no response from me at all.  I mean, it’s a red/grey pseudo tribal sunburst design in the background with the logo in the foreground—that’s all there really is to it.  And while it doesn’t per se offend me, I care so little about it that I feel as though I have to assign a low score (okay, so I do like the color combination, so I gave an extra point).

With an ambiguous name like “Power,” I was expecting a Red Bull clone.  I was mistaken—this is not a Red Bull clone; it tastes more like a really low-end carbonated white grape (?) drink.  The quality of the flavor was low enough that I had to sip my way along; if I were to have chugged the thing it might have disagreed with my stomach more than it did.

One thing you can say about Rip It—Power is that it works.  It’ll wake you up quick and give you enough of a boost to get going and stay going.

I got about 3½ hours of efficacy out of Rip It—Power before a slight crash.  Something I did like was that for most of the time I spent experiencing the drink’s effects, I was getting the full effect—it didn’t hit me hard and then leave me with something sufficient enough only to keep me awake.

Does it work?  Sure.  Do I recommend it?  Not really—Rip It—Power is another one of those staggeringly lackluster drinks that one could pass over in the energy drink aisle and not miss much.  But, if you’re reading this review, you’re probably investigating this drink specifically, so take the above and decide whether it’s worth your consumption.  As for myself, I think I’ll keep passing it over.