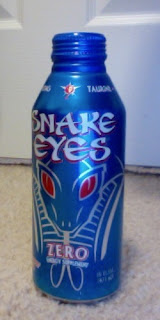 Approximately 120-160 mg…though I suppose it wouldn’t surprise me to learn that there was less.  Be cool to analyze these things and see the actual vs. advertised content.

If when I say “Holiday Station stores” you say, “Oh, yeah!  I know what you’re talking about!”, then you probably have seen these before, and have no need for me to tell you where to find them.  If, however, your response was, “Huh?”, then chances are you won’t be seeing these anytime soon.  Not that you’re missing anything.

I’ve said it before, and I’ll say it again—this looks cheesy.  You don’t want your energy drink to look cheesy—you want it to look eye-catching and maybe just a little bit bad*ss.  Snake Eyes Zero doesn’t come close to achieving either of these qualities—it just looks ridiculous, and is likely to be overlooked by all but the most curious of consumers.

With the name “Zero” and the blue color, I almost expected this to be a Rockstar Zero Carb knockoff—and let me tell you, I was glad it wasn’t.  But at the same time, my gratitude that they didn’t issue a sodomized version of one of my favorite energy beverages was short-lived.  I don’t know how to explain it, but this tastes like a Red Bull clone with some very, very cheap pineapple flavoring added.  The original Snake Eyes—Tropical Berry (this being a sugar free version of that beverage) tastes nothing like that.  It’s a mess to be sure, but I can’t account for how different the two drinks taste.  It makes no sense at all.  Anyway, all that aside, this flavor deserves a rant in and of itself for doing something so lazy and insolent as mixing Red Bull-flavored syrup with cheap-*ss pineapple syrup, but I think the idea speaks for itself.  If the other flavors have you disinterested, this one should have you running in the opposite direction—but definitely not because of the snake on the front of the can.

I don’t mind drinks that aren’t especially intense if the quality makes up for it—think Red Bull—The Blue Edition; if all you need is a slight boost that will work in a jiffy.  If, however, the effect of The Blue Edition is to blast those cobwebs in your head to oblivion and leave your mind clear and sharp, this one merely swats at one or two and wipes the remnants on their jeans, calling it good at that.  This is not by any means a quality energy beverage.

What mediocre kick you receive will last you two and a half hours at best.

Bad, bad, bad and bad.  This is a really poor energy drink all around.  Forget you even saw/heard about it and get on with your life.