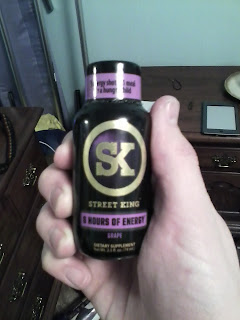 These seem to be more of a truck stop shot above anything else—local convenience stores and grocery stores don’t seem to carry it at all, but once you get on the road and stop at places like the Flying J it seems to abound.  (As an aside—I’ve read a number of reviews commenting on the high prices of these shots—well, I got them two for $3.59!  I love it when that happens!)

Street King seems to hit all the right notes in terms of their packaging—I love the stout 2.5 oz. bottle, I love the purple, I love the blingy gold logo and design.  Between the two shots, I did think the background would be better off with some sort of texture rather than just the black; in this case I think a dark diamond metal motif would serve the purple and gold well.

I’ve heard very good things about Street King—Grape, insomuch that I had high hopes that it might be the shot I’ve been looking for—i.e. the one that tastes good enough to actually make my getting into reviewing shots worth it.  Anyway, I can honestly say that it is much better than other grape shots I’ve had—it is far less bitter and tastes less fake than all of the others, which is something.  I also have to say, however, that I could not shake the sensation that I was drinking grape cold medicine during the fact—so in the end, my enjoyment was fleeting and my experience unsatisfying.

Kick is pretty decent, even if it wasn’t the best flavorwise.  If you 1) like shots, 2) need something to get you really alert, and 3) don’t want to deal with jitters, then this is a shot you should definitely consider.

A total of four hours passed under Street King’s influence, and they ended without a crash.

My own search for the ideal energy shot aide, Street King—Grape is one of the better ones I’ve had.  It tastes decent and works relatively well, and shot junkies who have not experienced it probably should—that way they stop buying things like 5 Hour Energy.

A final aside—for every one of these shots sold, the company donates a quarter towards the United Nations World Food Programme (old school spelling annoys me as well), which provides a meal for a hungry child.  If you’re looking to donate more than 50 Cent (the capitalist mastermind behind this shot) does through your purchase of this shot, follow the link below: