Review for The Magic Buzz Energy 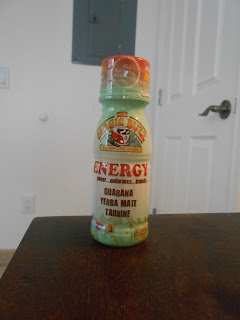 Found this at Winco, so this is pretty easy for me to get a hold of.  Don’t know if others will have as much success, given that the chain is largely limited to the western states.

The Magic Buzz looks about like an all-natural energy drink should—it’s got all the colors down, and has a mellow sort of look that seems to suggest that this isn’t your ordinary energy supplement, but one that you can rely on for a smooth boost of energy rather than a harsh, caffeinated blast.  My only concern is with the name…when you take a name like “The Magic Buzz” and put it together with the term “all-natural” and a 70’s hippie VW bus, what comes to your mind?  My point exactly.

I really love idea of healthy, all-natural energy.  Knowing full well that this practice of mine isn’t the healthiest in the world (being the one pock mark on the Mona Lisa of my diet and lifestyle), one can understand why anything that can help take the edge off it would be more than welcome.  I think a number of people share my sentiments, so you would think by now that most companies would have come up with a way to deliver such a boost and not make it taste so dang bad.

I have experienced firsthand just how delicious healthy food can be—I can’t for the life of me figure where people get the mindset that it has to be crap in terms of health to taste good.  The people at The Magic Buzz seem to be under the assumption that most (healthy eaters and non-healthy eaters alike) think this way, and that those that eat well are perfectly fine with having their taste buds scorched to bits.

Now, The Magic Buzz isn’t that bad—I have all my taste buds sitting on my tongue as we speak.  But the tropical fruit flavor is rather harsh, and is not helped in the least by the medicinal taste of the energy constituents present.  So by most energy standards, this might be alright for you—but it certainly won’t taste the part.

In addition to hoping that my energy supplements taste good, I also like it when they work.  Now, I’ve had relatively low-caffeine products that have worked fabulously, so sensitivity really isn’t an issue for me—which works to my advantage and that of my readers, because I can say with relative certainty that this falls pretty flat when it comes to kick.  The boost was perceptible, but not really intense enough to make much of a dent on the fatigue of a long day, or help me focus on my studies.  Just goes to show that “there” doesn’t mean “enough.”

I think I felt the meager effects for about an hour and a half.  Not cool.

I like what you were going for, Magic Buzz guys, but this is not a final product to be satisfied with.  Take it back to the drawing board and start from scratch.  Work on the flavor, up the caffeine—and use caffeine from green tea; the hydrous stuff is just marvelous.  If you do decide to do that, contact me and let me know once you think you know you’ve got it down.  I’d be happy to revise my review at that time.