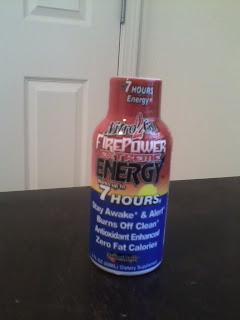 High—that’s all I can tell you.  Sorry.

This one might (check: probably will) draw your attention, but not necessarily for the right reasons.  Firepower Extreme has what is probably the noisiest, most cluttered packaging that I have ever seen on an energy product.  There are at least nine contrasting fonts that come into play on the front of this diminutive 2 oz. bottle, giving it a fairly disjointed look, and though the background (with a sunset) is a definite improvement over the store-brand sunburst of the Mega Shot, it isn’t enough to keep this chaotic mess from being a bit of an eyesore upon close inspection.

This is a 5 Hour Energy clone—which means it’s every bit as fake and harsh as the original.  I can’t for the life of me figure out why you’d want to copy something like that so exactly, but then again, I can’t figure out how people like the taste of ethanol, either.

At least initially, this is vastly more intense than the original 5 Hour.  I remember taking it down one morning when I was particularly sluggish, and no sooner than I had finished the two ounces I was positively infused with alertness—without jitters, funnily enough.  That lasted only about an hour, however, before tapering off into something less impressive—about your usual 7 out of 10.

Say what you want about this shot—but they aren’t lying when they say it’ll give you seven hours of energy.  I got just that.

…I have a hard time thinking who this shot is for.  If you like 5 Hour Energy but don’t like the price, there’s Eternal Energy—Berry.  If you like 5 Hour Energy but are looking for more energy, there’s the Sweet Berry Nitro 2 Go Mega Shot.  But this…this is just a slightly less expensive, longer-lasting alternative.  In every way it could appeal it only goes about halfway.  I’m mystified as to what the thought processes are that went into it—any input from fans would be helpful; and I’d be happy to revise this final section if I could but understand what the appeal is vs. that of your other alternatives.