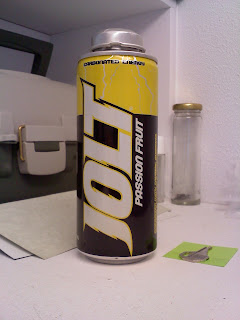 I’d call this scarce, but one needs to take into account the fact that it’s been discontinued when contemplating ease in acquisition.  I don’t have a clue how common this would have been back in its day.

Jolt Passion Fruit presents with the same battery motif as Jolt Cherry Bomb, just with yellow highlighting the upper portion.  I’m not especially wild about the look, but I have to take into account the fact that the can feels so dang nice in my hand.  Wish more cans could be like that.

Jolt Passion Fruit was far easier to get down than Cherry Bomb, even if I was far from wowed by the taste.  The initial sensation is relatively agreeable, but Jolt seems to have done a pretty half-hearted job of masking the taste of the caffeine and whatever other energy ingredients they have in there, a conclusion I reach from the fact that it reminds me more of the Triaminic formula for chest and nasal congestion than it does NOS.

The kick’s pretty decent, if it’s a bit less kicky than Cherry Bomb.  The sensation was reminiscent of a wall between the fatigue and myself—I had the feeling that the fatigue was there somewhere, but there was no way it was going to get to me anytime soon.

Jolt Passion Fruit was pretty dependable as far as staying power was concerned—my peak energy level (where there was that proverbial wall between myself and my fatigue) was fairly long-lasting, which is why it wasn’t surprising to me that the tapering off of the effectiveness was a little quicker than some.

To sum it up: good kick, not-so-good taste.  Well, to be perfectly fair, the actual taste isn’t that bad, it’s more the really noticeable medicinal aftertaste that you get after the fact that gets you.  If you don’t care about that sort of thing, well, this might be the beverage for you…if you can find it.  Which I wouldn’t plan on.