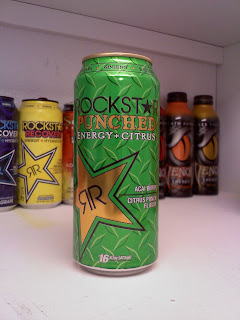 Okay.  Maybe this is just an eastern/central Idaho thing, but I can’t seem to find this stuff anywhere.  I had to have a family member bring up a can from California when they came and visited, but even they had plenty of difficulty tracking it down. 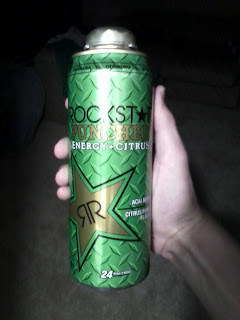 The packaging is acceptable—standard Rockstar motif, diamond metal background in a vivid green.  I do like the overall color scheme, though I can’t say I’m wild about the diamond metal pattern—doesn’t go well with the green.

Even for an energy drink, there was a significant difference between the initial and the final flavor.  First sip or two (or maybe three) reminded me of nothing so much as lime Jell-O, with that medicinal aftertaste that is so common in energy drinks.  After that cleared up, the flavor was more of an archetypal citrus/something else (probably the açaí berry mentioned on the can), and it really wasn’t bad—even if it does get old when you’re drinking an entire 24 oz. battery can.

Strength was pretty good, even for a Rockstar.  Once it got me going, I was going strong, and for a while it felt like there would be no stopping me.  For whatever reason, I’ve never found it as strong as the fruit punch flavor—no idea why that would be the case.

The first time I had this drink, I was a bit disillusioned—it gave out much quicker than other Rockstar drinks had, delivering perhaps a mere three hours of energy.  Later on, I figured this was probably a fluke, but didn’t make a second attempt until I learned it had been discontinued, at which point I tracked down a second can and gave it a whirl.  This time I got about four hours, which is about average for a drink with this kind of caffeine content.  Crash was still pretty brutal, though, and I really needed a nap once things had worn off.

It tastes alright and is largely effective, but in the end, I didn’t find this one to be terribly memorable.  Apparently no one else has either, since Rockstar’s nixed it from their line.  There are other drinks out there that are plenty potent and taste better, so I’m not terribly broken up about this.

With a caffeine content of 360 mg, it shouldn’t come as a surprise that this is a pretty dang potent drink.  You want to be recklessly energetic?  This might be your drink.

A word of warning, though.  I experienced a similar effect with this drink as I did the Monster Energy BFC—all the sugar made me feel sick.  So while I was fairly wired, the queasiness made it so I had a really hard time enjoying the experience to any degree.

Seven hours of energy, with, of course, a really nasty crash at the finish.

This is another one of those instances where the numbers lie.  This 24 oz. Rockstar Punched—Citrus earns points for kick, but the final rating doesn’t reflect how unpleasant the whole ordeal was.  If you really want to get wired, go with a Rockstar Zero Carb.  I’ve had it a number of times, and I have never once wanted to throw up after the fact.