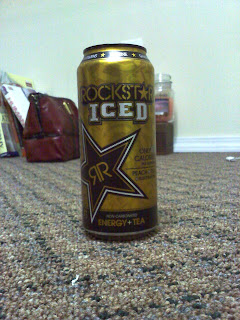 After a brief 13-month run (I’m revisiting this review on May 19, 2013), Rockstar Iced has been discontinued.

I suppose it shouldn’t come as much of a surprise—in my years of reviewing, I’ve never seen such an unenthused response from readers at the posting of a review of a brand spankin’ new product from a major energy drink company (since I first published the review, it’s received only 322 page views, with is about what my review of Rockstar Xdurance received in its first week up).  In any event, I figured with the discontinuation that I had better take the time to lay to rest some mixed feelings I’ve had about it since the first time that early April morning.  More on that when we come to the “Taste” section….

As long as you’re in civilized territory, this was pretty easy to come by.  Problem for me initially was the fact that I live in small-town Idaho, and it takes new products a while to trickle in.  It eventually did, but I owed my relatively early review of it to the fact that I had been in Utah the weekend before, and it was already everywhere there.

The can kicks butt.  I would refer you to the picture so it could speak for itself, but my shot doesn’t begin to do it justice, so I must attempt to do so.  The can has a satin finish, exactly like that employed by Rockstar Energy Cola.  The background is a sharp bronze, and coupled with the black it is extremely effective.  They could have left it at just that, but no—Rockstar took it one step further, adding white lettering to the logo at the side and in the name of the drink, within which there are evenly spaced reflective elements, which give the drink…how would I say this…bling.  Even if you aren’t looking for it, once it catches you’re eye, you’re ogling it through the refrigerator door until you come to your senses and grab a can.  Now, imagine how this would have looked like on a 24 oz. can….

And here, we get to the mixed feelings.

First time I had it, I quite liked it.  Tasted about what the can said it would taste like—peach tea—and was really quite a refreshing and enjoyable combination.  My only tiff was the obvious presence of the artificial sweeteners, which were then conspicuous enough take away from the experience.  However, I remembered experiencing the same thing with Monster Rehab—Lemonade, and the second time around I didn’t taste them at all.  Down the road, I decided to have another go, and grabbed a can at a nearby gas station—and wondered if it was even the same beverage.

In a word, it tasted harsh.  The peach flavor had an abrasive quality that I’ve never experienced with the fruit or anything inspired by it, and the artificial sweeteners only served to accentuate that undesirable property.  Subsequent experiences (there were two others after that) yield similar results—it really wasn’t good at all.

Well, the discontinuation came (along with Rockstar 2X, it seems), and I figured I’d better take the time to see if I could unravel the mystery of a delicious energy drink gone bad.  Acquiring two cans at a local gas station, I took down one the same way I had all the others (except the first one, it turns out…but we’ll get to that)—straight from the can—except I went about it more slowly this time around.  First few sips were exactly the same as before—coarse and unpleasant.  Making my way through it, that quality seemed to disappear, and it came to taste like a watered-down version of the first can.

The next day, I opted to have it on ice, which has made all the difference in the world with other drinks in times past.  Lo and behold, the harshness disappeared, and from the first sip I was quite enjoying myself again.  The artificial sweeteners were still there, but few drinks are perfect.

Bottom line—if you’ve had it before and haven’t liked it all that much, try it on ice…while you can, anyway.

Onto the kick.  First time, I remember I had scarcely gotten a third of the way through the can when I started to feel the effects, and I had a pretty good idea of what I was going to get—and I was excited.  Sure enough, I finished it up, and pretty soon I was feeling the full force.  Rockstar Iced delivered a seriously awesome kick, which infused me with some serious energy (even after getting only 4 hours of sleep) and gave me all I needed and then some to hit the ground running.

Near as I can tell, I got about 5 hours of energy before I could tell that the effects were wearing off.  I wasn’t paying all that much attention—too busy being INFUSED WITH SOME SERIOUS ENERGY!

If you can still find Rockstar Iced, all I can say is grab it!  I enjoyed drinking it once I figured out that it needed to be iced (go figure), and I seriously enjoyed the effects.  I have very little to say against this drink—just the artificial sweetener aftertaste, but in light of the deliciousness of the flavor itself and the exceptional kick, this lone fault is pretty dang easy to overlook.  Happy drinking!