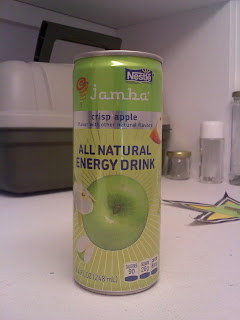 I’ve only ever seen these at Jamba Juice locations, which are blessedly relatively common here (power-sized protein berry workout…mmm).  Troubles finding these may arise if you don’t live near one.

Kinda generic looking, but other than that, the color and Jamba designs are enough to catch and hold one’s attention, particularly if you’re a fanatic for the chain.  Which I am.

Three words: STEVIA FREAKING REBAUDINA!!!  Yes, stevia…that “natural” and entirely unholy sweetener that companies feel the need to stick into their products to cash in on the “healthy” trend, notwithstanding the fact that U.S. troops found large caches of stevia during the Iraq campaign (for that I have reason to think that Saddam must have had W.M.D’s on the brain) and it is thus clearly NOT something you want to ingest.  I really hate the stuff, and its presence in this drink is entirely unneeded (22 grams of sugar in the 8.4 oz can) and the result the equivalent of a pock mark on the face of the woman in the Mona Lisa.  I love apple-oriented stuff, and if the stevia weren’t there, I could very much have enjoyed the drink, with all its tartness and apple deliciousness.  But it was, and rather than relishing it I was trying to get it down about as fast as I could so as to bypass that Stevia taste.

Not especially intense, even though I wouldn’t say that it’s a bad kick.  It’s just mild-acting, and if a moderately clear head is all you really need, then you should probably look into a drink with this kind of kick.

Even if I wasn’t at my most heightened state of awareness, this stuff did wake me up a bit, and once I got to that point I did stay awake without too many problems.  It is similar to Team Realtree Outdoor Energy (a superior energy drink; read the review here) in that it gives an actual jump-start rather than delivering a synthetic temporary boon.

From this experience, I have reached one definitive conclusion: stevia sucks.  It is a destructive substance which ruins just about everything it worms its way into.  Without it, this wouldn’t be a bad energy drink, and one that I’d be perfectly happy to recommend.  If you like or at least don’t have a problem with stevia, ignore everything I said and give this a shot.  Otherwise, stick to the smoothies.  You’ll like ‘em more.