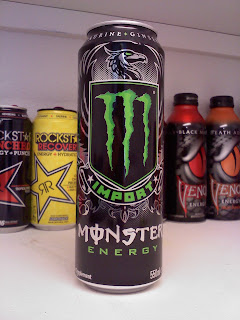 You won’t find Monster Energy—Import everywhere that the original is sold, but tracking it down isn’t by any means hard.  You should be able to find it whether you’re looking or not at one location or another.

Even though it’s not as in-your-face flashy as some (think Monster Energy—Dub Edition), the packaging for Monster Energy—Import rocks.  It’s the only energy drink I know of with a crest—in this case a stylized silver eagle and shield with the green Monster M emblazoned thereon—and this gives the can a very regal look that is unique in the energy drink world.  And I can’t help but make note of the twist-open lid that Monster Energy is so proud of—I liked the idea of being able to reseal my drink, even though I didn’t really need to (I drained the can pretty quickly).  And yes, I was able to open it with one hand—don’t feel bad if you didn’t; I’m married, so it’s expected that I should be able to.

The basic idea behind Monster Energy—Import is the same as the original, though it was pleasantly less sweet and a great deal smoother.  Taking the place of the extra sugar is a sweetener called acesulfame potassium, which may be partly to thank for the new and improved flavor.  Whatever it is, in my book, it makes a world of difference.  It is my opinion that Monster Energy—Import maximizes the potential of the traditional energy drink flavor (Red Bull clone, in layman's terms), and that every attempt to put forth a beverage with that same taste should be tried and measured using Monster Energy—Import as the standard.

I found this drink to be one of the more potent of any of the Monster Energy line I’ve had thus far.  At the peak of my energy experience, I was significantly jittery, and once that was over, it was replaced with an appreciably heightened state of awareness that lasted for quite a while after the fact.

The kick I got out of Monster Energy—Import delivered an effect that lasted about as long as any other energy drink I’ve had.  The tapering off was very gradual, and once that was over, there was no crash to speak of.  I was just fine, and was ready and able to take a nap to make up for the sleep I had lost the night before.

I am quick to say that this was not only one of the best of the Monster Energy line in all categories that matter, but one of the best energy drinks I’ve had overall.  It looks and tastes so good you can honestly believe it’s imported (even though it is made in the USA), and it gives me about as much of a kick as I could ask for.  By reviewing this drink, I hope I’ve made you curious.  If you've got to go with a Monster Energy product, make Monster Energy—Import your first choice.