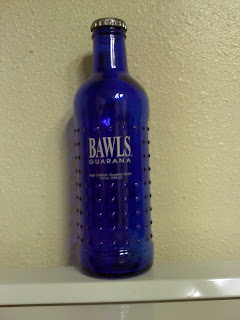 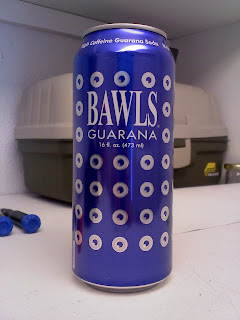 Bawls Guarana comes in two sizes—a 10 oz. glass bottle and a 16 oz. can.  Around here, I can find the bottles if I look hard enough, but the cans (which I’ve been searching high and low for) are much more difficult to come by.  But unless you’re as OCD about what goes into your collection first as I am, you can just buy two bottles and you’re good for kick.

Now, as for the can design—I like it.  It is exceptionally simple—logo and uniform pattern of white and silver rings over a very nice shade of blue serving as a background—but there is a good degree of boldness in that simplicity, and the result conveyed is a degree of confidence that other drinks have yet to match.  And as for the bottle—it’s an automatic 10 for being a bumped, cobalt blue beauty with contrasting white lettering and for having a resealable cap.  That’s just awesome.

My first experience with Bawls Guarana left me feeling kind of lukewarm.  It was alright, I suppose, it was just…very different.  I wasn’t terribly certain how to feel about it.  Anyway, that was the can.  The second time around I bought a bottle, and I don’t know whether the taste had grown on me or whether Bawls just tastes better out of glass bottles, but I loved the stuff.  It was delicious.  It was fresh, clean, and almost citrusy—definitely not your run-of-the mill energy drink.

Now, ordinarily, I don’t get enthusiastic when I give anything a 6 out of 10, but in this case I am.  This was the perfect pick-me-up after a long nap that left me feeling more groggy than usual—I drank it, and BZING—I was awake.  No cobwebs, no residual fatigue, nothing.  I wouldn’t say that this is the way to go if you’re passing out at the wheel and you have eight hours to go, but if you’re feeling a bit run down and just need one little boost to get you functional again—Bawls Guarana in a bottle has no equals.

Not terribly long lasting, but it didn’t need to be.  It was near the end of the day, and I didn’t need rock it like a hurricane for the next four or five hours.  The 2½ I got were just fine.

Bawls in a bottle is a situational sort of energy drink—not perfect for every situation, but for the situation in which I was in, I loved this drink.  This is the sort of thing I’d have a refrigerator full of just for those days where I’m not tired enough for a Rockstar but tired enough that I need an extra spark to keep up with things.  For being so perfect in its niche, the 10 oz. Bawls Guarana has very much earned my respect.

You get more caffeine with the can, but the boost isn’t so much that you’ll be exclaiming “Bawls has balls”—which I have been looking for an excuse to say.  Even if it’s not so strong as one would anticipate, the effect is still acceptable.  It woke me up at and delivered a reasonable degree of alertness for my drive from Highland, Utah to Rexburg, Idaho, and truthfully, I didn’t feel as though I really needed any more than that, though I would recommend something stronger if you’re nearly falling asleep at the wheel.

Given the relatively understated nature of the kick, I was pleasantly surprised that Bawls had the staying power that it did—it was a good 3½ hours before I was feeling tired again and could have used a second pick-me-up.

Bawls in a can was a good experience, though one is probably not enough to get you through the really tough energy-requiring situations.  That said, I liked it enough that I wouldn’t really have a problem downing a few bottles (or cans…I’m reviewing the cans) to really get wired.  Take that into account when you make your decision.