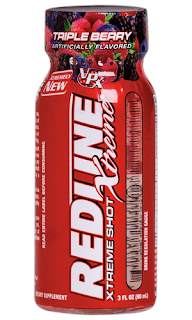 I got mine at Walgreens, which is a common enough chain that I wouldn’t sweat too much about finding this.

Like all Redline products, this is the sort of thing that looks right at home amongst workout supplements (looking more like a medicine than anything else), but looks decidedly out of place when sharing the shelves with energy products.  I don’t have any complaints with this; I find it entirely appropriate—Redline shouldn’t look like something to be drank without a second thought when someone’s feeling sleepy.  My only tiff is that this would look much better in the glossy blue of the RTD line…and the fact that there are four berries found in the graphic at the top of the bottle, when the name of the product is “Triple Berry.”

How do I describe the flavor here…?  Okay—imagine a spectrum of berry flavor, with 5 Hour Energy Extra Strength (which tastes nothing like berries at all, but rather is bitter and acrid) at one end, and a handful of fresh berries at the other.  This is about halfway in between—it is bitter and unpleasant, but you can taste the berry influences, and begin to understand where 5 Hour Energy gets off saying that it tastes like berries.

With its whopping 300 mg of caffeine, the boost you get from this shot is not as intense as you would expect—though mind you, it is very potent and not the sort of thing that you should drink casually.  Imagine what it’s like to have quite a bit of energy at the surface, and feeling as though there is an endless reservoir of it just beneath your skin—not something you can tap into at will, but something that gradually rises up, like a hot, slow burn.   I strongly recommend it for the gym or other very serious physical exertion, and for nothing less than that.

Most workouts do not need seven hours of energy—in fact, I’d say if you need to be there more than an hour, you’re doing something wrong.  In any event, there’s buzz time to spare, enough that you can absolutely get away with a half bottle (as opposed to the full bottle I drank).

The flavor leaves something to be desired, but who drinks these for the taste?  If you need an enormous rush of energy for your workout or construction work or whatever it is that you do that requires you to be ridiculously energized for, this will definitely do the trick.