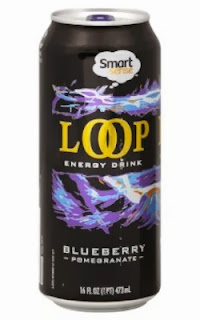 I really just don’t get the concept of these drinks.  I mean, I get that it’s the K-Mart brand and that they didn’t put a lot of money/thought into it, but this looks as though people worked around the clock just to make sure that the look didn’t make a lick of sense.  First of all—why on earth would you name it “Loop?”  All the good names taken, so you just picked the first that sounded passable?  Second—what’s with the funky inkblot background?  Third—could you have made the print job any more granulated and shoddy?  Fourth—the ‘Smart Sense’ stamp looks terrible.  Lose it as quickly as possible.

I used to like this flavor alright.  Wasn’t very smooth or taste particularly like pomegranates or blueberry, but if I was in the mood for a sugary soda of some kind I would go for it.  Now the flavor is one of the most overdone on the market, a least common denominator sort of beverage that ranks down there with Red Bull clone and crap fruit punch.  The mere idea brings a contemptuous sneer to my face, an aspect that now remains fixed as I make my way through the can.  You want the flavor done right?  Grab a Xyience Xenergy Blue Pom Premium (they might call it Blueberry Pomegranate now)—any other incarnations are insulting and unnecessary.

The one surprising thing about these is that the sugared variants kick like a boss—enough even that you forget for a moment that you’ve just slarged down roughly 25% of your daily intake of carbohydrates via high fructose corn syrup.  Of course (in my experience), if you don’t burn it off, you pay for it later; but in the meantime it’s something you can easily enjoy.

Five hours; crash if consumed without ample physical exertion soon after the fact.

They kick well, but there are so many more palpable and equally effective ways to get your kick that I’m not even thinking about recommending it.