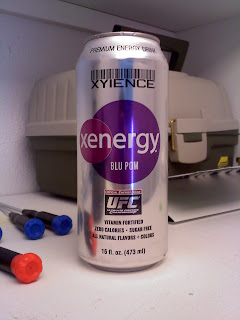 Not sure why this is the case, but at least around here, the gas stations where I’ve picked up all my drinks in the Xenergy Premium line carry all but this one, which I found by happenstance in West Yellowstone while on vacation there.  I have not seen it before or since.

I actually don’t mind the vast exposure of aluminum on this can—probably because of the blue/purple spheres, with which the silver color of the aluminum seems to cooperate and create a scheme that doesn’t induce flinching and nightmares of watered-down zero carb beverages.

Xenergy Blu Pom Premium tastes a good deal smoother than most others of the Xenergy line I’ve tried.  I’m not sure if a different sweetener blend is used here or if it the blend just works better with the flavoring, but in any case I found the result to be extremely pleasing.  And, as with all Xenergy drinks I’ve had so far, this actually taste like what they say they will—in this case, blueberries and pomegranates.

The kick is less glaringly obvious than that put forth by other Xenergy products, but is not by any means less effective.  It made no compromises in getting me going, and once I was, I was going for good.

Xenergy Blu Pom Premium’s performance in this regard was commendable—it provided a pick-me-up that lasted most of the morning and a good part of the afternoon, even going so far as to delay the after-lunch crash I usually have to deal with by about an hour.

While it is a hair below Xenergy Cran Razz Premium in terms of taste, Xenergy Blu Pom Premium is still a delicious and effective entry to the line and is, by my estimation, one of the best energy drinks that Xyience has to offer.