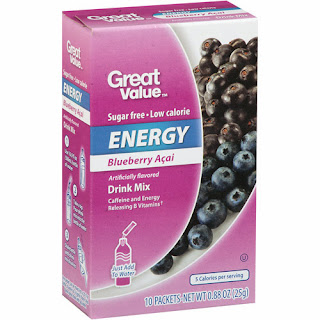 It’s the Wal-Mart brand, so unless you live in, say, West Yellowstone, Montana, you should be golden.

Great Value Energy doesn’t look all that great—but who cares?  People that go for this sort of thing are going to look for the word “Energy” on the box, and then their eyes will go right down to the price tag—which will ultimately determine whether they will buy it or not.  So is it aesthetically appealing?  No.  Does it matter?  No.

In contrast to the other Great Value energy mixes, this one is exceptionally finicky.  Too much water and you wind up with something like bland Gatorade, devoid of any real nuance of flavor.  Too little, and it’s foul—bitter and pungent and overwhelming (don’t even think about mixing in two packets at once).  Get it just right, though, and it is, in fact, very good—you can actually discern the flavors of both the blueberry and the açaí, something that you rarely get with either flavor, and what’s more, Wal-Mart actually nails them pretty good.  My advice: fill up a mason jar most of the way with water, mix it in, add six ice cubes.  Add more water if there’s room left in the jar.  It’s taken me almost all ten packets to figure that out, but now that I’ve nailed it, I’m happy to pass on the knowledge.

This’ll give you an average boost without too many jitters—fairly run-of-the-mill stuff.

Even though the kick’s nothing worth getting enthused about (can you tell that’s how I feel about it?) it tastes pretty good as long as you can get the quantity of water right, and I suspect it will do for about 99% of the general caffeine-consuming population.