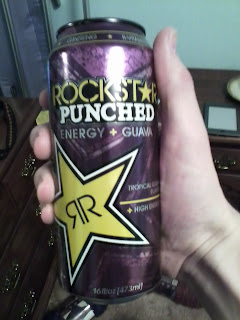 Becoming more common slowly but steadily—as to whether it will altogether replace the Juiced version (as it seems to be doing) and thus attain its respectably commonality, only time will tell.

Say what you want about Rockstar in general—they know how to make a can.  This new version of their guava drink sports the same fractal background that made its debut with 2X and is slowly but surely making its way into the rest of the line (Zero Carb, Tropical Fruit Punch, etc.), except with a purple that is nicely accentuated by the bright yellow star and tab.  Notwithstanding its close resemblance to the Juiced beverage, the new design is bright and striking enough to make it pop afresh.

I’m glad that Rockstar is putting so much emphasis on function in their new beverages—almost without exception, those that they’ve released in the last year have contained 240 mg of caffeine and have had kick to spare.  Problem is that they don’t seem to be to worried about how they taste—I wasn’t all that impressed the new Bubbleberry drink, Iced is pleasant but suffers from an overabundance of artificial sweeteners (as does 2X, even though it is a definite improvement over what vileness was contained in the 12 oz. can), and…never mind, I can’t bring myself to frankly criticize Xdurance, even if it does taste a little unusual.  Anyway, I consider Rockstar Punched—Guava to be a continuation of this phenomenon—it just tastes like carbonated sugar water with some artificial guava flavor.  I remember liking Rockstar Juiced—Guava, which I reviewed back in the early days of the blog, but some weren’t thrilled with the 10% juice version I tried (I hadn’t gotten the chance to review the 50% juice version; that was before this site’s time).  Well, chances are that crowd will be less than pleased with this one, which has no fruit juice to speak of and tastes about as fake as they come.

As long as you don’t mind the flavor and can finish the whole can, you’ll be able to revel in the plentiful boost that this drink provides.  As I mentioned, this contains 240 mg of anhydrous caffeine, and will get you as alert and buzzy as you could ask to be.

Five or six hours passed before effects the drink wore off, with enough of a crash that I opted to take a nap in the Lazy Boy rather than try to continue plowing through it.

I still vastly prefer Rockstar Zero Carb, but as far as efficacy this is a worthy addition to the Rockstar line.  As far as taste—I would love them to go back to their 50% juice blends.  Might be a little more palpable if they did, and I would surmise that enough people would buy it to make up for the added expense.