Review for Up To 10 Hour Super Charge--Concord Grape 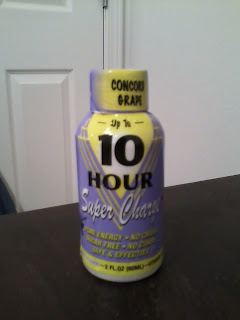 I’ve only seen these at one location across the three states I make my hunting grounds, which typically translates into widespread rarity.

Don’t think I’ve ever seen a shot—or any energy product, for that matter—subject to such bad execution.   I’m really not even sure where to begin—so bear with me as I try to critique this in a fluid succession, rather than just throwing down all the things about it that I don’t like about it at once.

I suppose the first thing that needs addressing is the fact that the label itself is so badly designed.  This is apparent in the solid background, in the strange yellow triangular pattern towards the top (where on earth did that idea come from?), and especially in the extraordinarily cheesy clip art image of the snowboarder.  The whole thing smacks of design by a designer who has absolutely zero interest in his/her work.

Second is the name of the thing—or lack thereof.  “Up To 10 Hour Super Charge” isn’t a name—it’s a description, and a really vague, butt-covering sort at that.  It seems to say “hey, you could get up to 10 hours of energy out of this…but we’re going to add that ‘up to’ part to it so you can’t get mad when you get less than that.”  Were they really shooting for 10 hours of energy when they formulated it?  Or are they just throwing a high number out there to rope you in with the thinly veiled false promise of prolonged energy, only to screw you in the end?  My experience suggests that the latter is more likely.

Third and last are the packaging materials/processes—they are really shoddy!  Eternal Energy shots cost less than half the price of one of these and still manage to do a job light years better than this.  Rather than the standard albiet sturdy 2 oz. bottle, you get a thin-walled, semi-translucent variant, and the shrink-wrapping is so poorly done that my (almost) 3-year-old son could almost certainly have done a better job.

Alright…so I’ve written reviews shorter than this tirade against the packaging, but it really annoys me.  It looks and feels and is obviously incredibly cheap, yet it still sells at $2 a pop—blatant bargain bin fare, yet at a premium price.

If, after all the issues with the packaging, I found that all the thought and money had gone into creating a first-rate shot, I might have been able to forgive Citco, but the shot isn’t any better than the look.  Calling it “Concord Grape” rather than just “Grape” got my hopes up, but alas—it was in vain.  It’s not as bitter as most grape shots to be sure, but the sweeteners and whatever else went into this give it an acrid syrupiness that had me wincing throughout.

Nothing really special here—it’ll wake you up, sure, but it’s a far from impressive experience.  “Ordinary” actually sums it up nicely.

All in all, this is an exceptionally lackluster shot.  Nothing about it indicates to me that anybody involved in the creation thereof actually cared about what they were doing—just crankin’ out overpriced shots to get in on the caffeine consumer market.  Well, concerned caffeine consumers, take my advice and don’t let yourself get screwed—avoid this shot.  There are plenty of other products out there that deliver exceptional energy experiences, and what’s more, they don’t cost as much as this one.