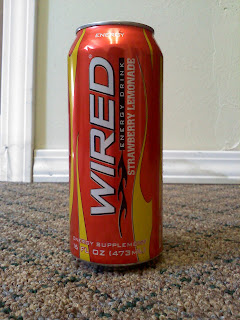 Okay…kind of lost it on my last review (Wired Diet Berry).  The…average-ness was just too much.  I think I’m under control now, but this is a Wired beverage we’re talking about here, so I make no promises….

Kind of tired of finding new ways to write this, but if you’re after a Wired beverage, go to WinCo.  They have them in appalling abundance there.

Meh…better than X Lemonade, but still not all that great.  One would think that red and yellow on the Wired motif would work wonders for the flames, but all I can think of when looking upon it are strawberries—which works with the flavor, but not the flames.

Taste is alright—identifiable as strawberry lemonade, kind of agreeable, kind of fake, and…carbonated.  Call me weird (which is a rearrangement of the word “Wired”, now that I look at it), but I just don’t think strawberry lemonade should be carbonated, unless you’re at Applebee’s.  That’s my biggest issue with it.

Must…maintain…control…while…reporting…(swallows)…jitter-free...AVERAGE…kick.  Whew.  There.  Took a lot of effort, but no ranting.  But…two categories to go still.

Alright.  I think I’m done with the 94 mg caffeine/bare-bones energy blend Wired drinks—which is good, because I’m sick of the multitude of ordinary energy drinks.  Take this, for example.  It’s strawberry lemonade.  It has caffeine.  And…that’s all I really have to say about this.  It’s ordinary, just like most Wired products I’ve reviewed as of late, and there are far too many drinks out there begging to be reviewed to spend so much time on these cookie-cuter beverages.  Drink this if you feel thus inclined.  Otherwise, buy something else.