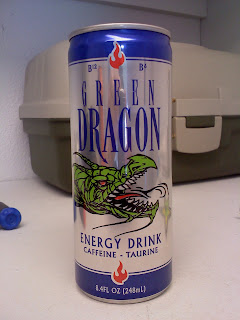 EASE IN ACQUISITION—6
The only place I’ve ever seen this is at WinCo stores.  Good news if you're looking for it and live out west, as I do, bad news if you don’t.  Kind of.
APPEARANCE/PRESENTATION—6

About what you'd expect for 78 cents—the name of the drink and a corresponding green dragon front and center.  Stylized red flames visible on uppermost and lowermost portions of the can.  Nothing inspired, but nothing to be especially critical of, either.


TASTE—6
This was a drink I found…unusual.  First thing you taste is the traditional Red Bull flavor.  You think “Red Bull clone” and you keep drinking.  It’s odd, but after the first few sips, the taste… metamorphosizes.  It loses any semblance of the previous flavor and becomes something completely different.  In this case, it’s kind of lemon-like, only not so sour.  Honestly, even though it’s not unpleasant per se, the effect is kind of cheap and undesirable.
KICK (INTENSITY)—5
Green Dragon was another energy drink that didn’t wake me up, but it did keep me from passing out in my human anatomy lab.  It didn’t do much more than clear out the cobwebs, but that’s all I really needed.  This was another area in which I did not have very high expectations—I’m guessing it had the typical 70-80 mg of caffeine (I could not for the life of me find a caffeine content anywhere) in that 8.4 oz. can, which usually isn’t enough to do a whole lot.  Even if by just a bit, it did exceed my expectations.
KICK (DURATION)—7
The drink actually has a longer-lasting effect than I thought it would.  I left my lab and found a nice quiet place to try and take a nap, and I just couldn’t get myself to sleep.  It wasn’t that I wasn’t tired—heaven knows I was—but I just couldn’t get deep enough to get to the point of actual sleep.
THE DRINK OVERALL—6
Well, it’s not terrible, I can say that much.  It’s not the great by any stretch of the imagination, but it’s not really that bad.  6/10 is not what I consider to be a passing grade, but if you’d like to try it, go ahead.  For 78 cents, it’s one of those “what-do-you-have-to-lose” situations.