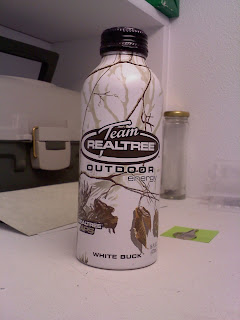 Nowhere to be found.  I’m almost tempted to take a sample, throw it into the spectrophotometer up at the biology department, and find it that way.  But then again, Team Realtree might sue me if I attempted to publish the caffeine content, so probably not the best idea.

By and large, Team Realtree Outdoor Energy—White Buck is pretty scarce; only a handful of the outdoorsman’s stores where I frequent carry it.  Good thing is that if you can find one you can find ‘em all, which makes satiating one’s curiosity for the line/filling vacancies in one’s collection somewhat easier.

Well, there’s not a white buck to be found anywhere on the bottle, but the snowy woodland it portrays is still nice to look upon, and is packaged in a nice, thick aluminum bottle, for which I’m always willing to grant an extra point or two.

White Buck is meant to be a Red Bull clone, but to be truthful it isn’t an especially good one.  It has the same combination of flavors as Red Bull or Monster Energy or any of the others, though more emphasis is placed on one of those flavors more than the others, resulting in the drink with poor balance and an unpleasant taste reminiscent of too-sweet white grape juice.  I don’t mind different takes on a familiar formula, which sometimes works (as in the case of Monster Energy—Assault) but in this case, it doesn’t.

It’s a little slow getting started, but once it finally started working, I was actually impressed.  I’ve kind of figured out a way to control the jitters such that they aren’t as quick to manifest themselves, but in this case I found it hard to help myself—even my wife seemed to notice and raise an eyebrow at my excessive chattiness.

White Buck continued to perform well quite consistently throughout the afternoon.  There was a semi-gradual tapering off of effectiveness after 3½ hours or so, after which there was no crash, though a nice nap came with relative ease.

I’m a bit torn in my final assessment.  On one hand I’ll make no claims for the flavor, but at the same time I found the kick to be commendable, and for that the drink does deserve at least some recognition.  I’ll call it a toss-up, and leave the decision up to the reader.