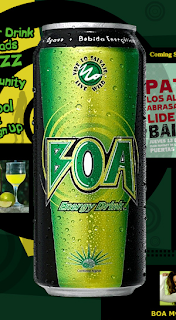 This review has (once again) been brought to you through the contribution of Big Red Boots, administrator of possessedbycaffeine.com.  For your generosity, Mr. Boots, we thank you.

None listed on the can, website, or anywhere on the web, for that matter; best guess is 160 mg—but don’t quote me on that.

I got this in a trade, so really, I have know way of knowing for sure.  In my trans-state travels it has yet to show up once, though, so I imagine that distribution is pretty limited.

It could use some work, but I like what they were going for here.  Simple designs, vociferous fonts, and vivid coloration are the can’s means of snagging your attention, and in this it succeeds.  Upon close inspection I find that I appreciate the bilingual can and their emphasis on the cultural influences of this drink, but could go without the faded graphic of fruits or whatever at the bottom of the can—it’s not printed well enough that it adds to the design, and it gives it a cheap, Rip It-esque look which I, if I were designing energy drink cans, would avoid.

Feelings on this are very mixed.  On one hand, I love how…Central American this drink is.  I spent two years in Guatemala, and drinks like this remind me of the native-brewed aguas gaseosas I would buy down there every so often.  It has a sharp lime flavor that had me sipping slowly so as to appreciate it, and the flavor of the agave complemented it nicely.

When I think of agave, I think of something light, but sweet.  The agave in my cream of wheat never makes it thick or syrupy, just sweetens it and lets me enjoy it without having to worry about the glycemic index.  If you look at the back of the can, you’ll find that in addition to the small quantity of fructose supplied by the agave, they dumped in a bunch of sucrose to helps sweeten it—which to me is missing the point of the agave entirely.  When you use agave, it’s for the low glycemic index—heck, I have diabetic family members who uses it with oatmeal and what not and it hardly puts any more of a dent in their blood sugar than oatmeal without—and for the degree of sweetness.  I can appreciate lime with agave—that would be a winning energy drink that I would be perfectly happy to buy on a regular basis—but adding all that sucrose and making it so thick towards the end kind of blew it for me.

In terms of energy, this isn’t bad—but, it could be better.  At the very least, it woke me up and let me get through my couple hours physiology studying without too many problems.

That said, I’m kind of glad I didn’t drink this before a terribly long study session, because the crash I had after the three hours of moderate energy would have put an end to it.

This is a drink worth experiencing at least once, but I don’t think I’d be buying it more often than that—not unless, of course, they decided to lose the sucrose and leave the sweetness to the agave.  Then, of course, I’d leap at the chance to try it again and review this again.