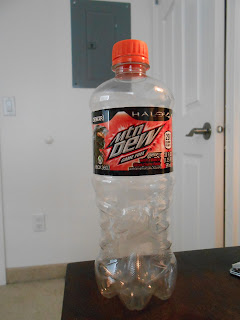 This may have something to do with the fact that I wasn’t aware that this product existed until a few of weeks ago (special thanks to Avery, gentleman and reviewer extraordinaire at addicted2energy.com for posting a review on it), but man alive, this thing was a bugger to find!  It took me weeks of stopping at gas stations before I finally found a place that still carried it, so however common it was during its promotional run, it’s basically gone now.  Fans need not worry, however; chances are it will be back soon enough.

(It occurs to me that you might have a better idea of what to look for if I had taken a picture of this thing while it was full.  I didn’t, so picture this thing filled with a violently fluorescent red-orange liquid.)

This is pretty typical Dew fare in terms of looks—obnoxious “MTN DEW” spelling, bright colors, faded sunburst background, gamer-oriented imagery (Master Chief from Halo 4 this time around), and a general XTREME look.  I get bored very quickly with this “United States of DEW” and “DEW or DEW not…nah, just DEW!” kind of fanfare, but I guess there are enough people out there who are suckers for it that Mountain Dew gets away with it.

On the plus side, I do think the raised “MD” on the gripping portion of the bottle is pretty cool.

Mountain Dew drinkers are a particular lot—they like their sweeteners high-fructose, their flavors artificial, enough preservatives to mummify you from the inside otu and a spectrum of dyes that will have you urinating a kaleidoscope of colors for weeks after the fact.

That said, if you’re a Dew drinker, then you’re probably going to love Game Fuel, which is essentially Dew with 30 mg more caffeine/bottle.  I do like the cherry citrus flavor, but I had only a few sips to enjoy it before the onslaught of fructose overwhelmed me and all but made me sick to my stomach.  Like I said, Dew drinkers will probably love it and take it down by the gallon, but I would love to have seen 1) a LOT less sugar (and ideally, use sucrose rather than fructose), and some sour to the mix to balance out the excessive sweetness.

Now, I did surprise myself recently by buying a regular Mountain Dew (Review the Dew energy rant coming soon) and actually enjoying it—but it was on ice, which might have had some effect on my perception of the sweetness.  Maybe if I get the chance, I will buy another bottle of this and see if ice helps any. 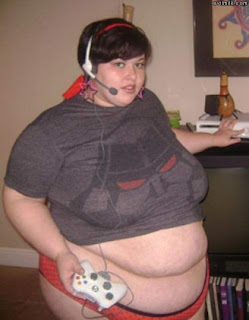 So…30 mg more caffeine than regular Dew!  When I found out a product like this actually existed, I actually found myself excited at the prospect.  Now…how does it deliver?

Honestly, not all that much more than the regular stuff.  It makes a difference to be sure, but the little bit of extra buzz is countered by the general ick I felt after downing 77 g of fructose in that 20 freaking oz. bottle.  Now…from what I’ve seen, most of this drink’s target demographic will probably take down an average of three or four of these at a time (though some might not be so sparing…see Figure 2 to the right), which would probably deliver a decent buzz…assuming their pancreas survives the experience.

Three hours, I think, with plenty of crash to spare.

I guess the answer to the question of whether I recommend this could be best answered with the counterinquiry “are you a Mountain Dew fanatic?”  If so, then this is the bona fide nectar of the gods, delivering all the sickeningly sweet…goodness (?) of Mountain Dew plus some additional caffeine.  If not…probably best to shy away from this one.