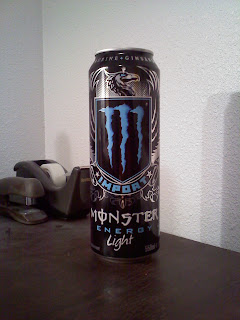 I don’t know if it's because Import Light is just taking a while to catch on, but by Monster standards it’s a bit hard to come by.  Still, it isn’t by any means impossible or even hard to find, but don’t be frustrated if one location doesn’t have it—just check the next closest, and chances are it’ll be there.

I love that Import Light features the familiar crest and that awesome resealable can of the original; my only real tiffs with the beverage involve the substitution of blue for green in the design, which doesn’t seem to work as well with the silver crest as the green, and the freehand font in which the word “Light” written beneath the Monster Energy logo, which just seems out of place on an otherwise stately format.  Even though the effect lacks creativity and is not quite as impressive as that of the original Import, some of the appeal still remains, and will probably be enough to pique the curiosity of the health-conscious energy seeker.

Import Light was a thoroughly enjoyable taste experience—it has the same complexity, the same smoothness, the same careful emphasis on sour over sweet as the original; the only thing I have to say against it is that it does betimes have a moderate artificial sweetener aftertaste that proves to be a bit distracting.  That aside, Import Light is exceptionally easy to enjoy, all the more because you don’t have to worry about the untold calories in sugar you’re consuming—because for the most part, they aren’t there.

Import light held its own in terms of taste, and in like manner delivered a fantastic kick that left very little to be desired.  It starts quickly (it was already beginning to work its magic as I was finishing up the can), and during the fact I enjoyed a very high level of functional alertness, with jitters enough to be noticed but not to be considered excessive.

Full marks for Import light in this category—I enjoyed hours of a nice, smooth energy boost, and even after the fact staying awake was not a problem for another long while.  I crossed the finish line without a crash, just a pleasant sleepiness indicating that a nap was in order.

With a taste and kick like those delivered by Monster Energy—Import Light, there is very little I can say against it.  Fans of Monster Energy who are engaged in a bit of calorie counting (and even those who aren’t) would benefit from giving it a shot.