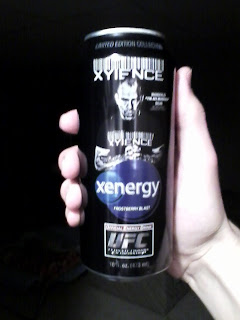 Pretty tough to come by, unless you live in an area with a Rocket Mart—those here in the Tri-Cities area of Washington seem to have it in stock fairly regularly. 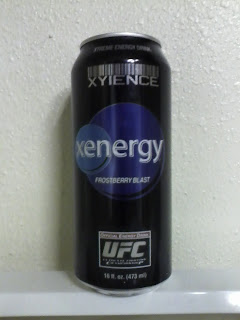 I love the simplicity of the Xenergy Xtreme can design, with the sleek black background and the bicolored spheres in the foreground.  In the case of Frostberry Blast, the ice blue colors of the spheres are especially effective and give the can the potential to be exceptionally striking—only problem is the picture of Wanderlei “The Axe Murderer” Silvia, which looks bizarrely out of place and ruins the whole effect.  I know that Xyience is the official energy drink of the UFC, but there has to be a better way of supporting the organization than defacing the drinks with pictures of butt-ugly fighters that would probably kick my trash if they found out I called them “butt-ugly.”  NOTE: Finally got a can without Silvia on it—doesn't it look so much nicer?

To star off, I don’t have a clue what the heck a ‘frostberry’ is, so I really didn’t know what I was going to get—vague suspicion that it would be berry-oriented aside.  Popping the top, I got a distinct blue raspberry smell, and taking a swig, I found it to be the most palpable blue raspberry drink I’ve ever had.  The best thing about it is that it tastes real—which is something I’ve come to expect of Xenergy beverages, but have rarely been able to appreciate to this extent.  Beyond that, the only elaboration I believe necessary is to say that this is a fairly sour beverage, but not to the extent of being overwhelming—only pleasant.

After tasting and performing so well up to this point, it would be a shame if Frostberry Blast wore off prematurely.   It doesn’t—it delivers a solid five hours of spectacular energy, followed by a slow, mellow tapering off with no crash.

Xenergy Xtreme Frostberry Blast has earned the right to be called one of Xyience’s best beverage, and given the quality of the line, this is exuberant praise indeed.  If you’re looking for an all-around superior energy drink, make it a point to buy yourself a case of Frostberry Blast