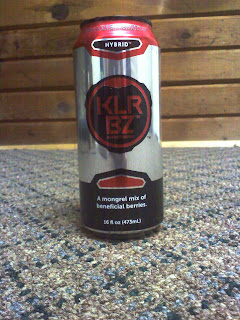 This is an emerging energy drink, and as such it is not yet readily available.

Hybrid’s got a decent look to it.  I like the overall design (I don’t even mind the bare aluminum; somehow it works well here), and the color choice here isn’t bad, even if it’s not as effective as Dragon Spit’s orange, or as appropriate as Proto’s green.  That aside, I’m now going to proceed with my GHAA spiel.  If you’ve read one of my Klr Bz reviews before, you can probably go ahead and skip to my evaluation of the taste, otherwise keep reading, because it’s something anyone desiring to know anything about Klr Bz should know.

What makes Klr Bz unique is the inclusion of an amino acid blend called Giant Hornet Amino Acid (GHAA).  From the website: “GHAA, Giant Hornet Amino Acid, is a synthetic version of the secretion of the larvae of the Giant Asian Hornet. This secretion contains 17 amino acids that metabolize the fat stored in the hornet’s abdomen and turns it into energy, allowing it to fly up to 60 miles in a single day at speeds of up to 25 miles per hour—thus providing SUSTAINED ENERGY.”

Now, my question is this: if you were an energy drink company, and had such a distinguishing characteristic central to your drink’s identity, and were confident that said characteristic was really going to work wonders for your consumers, why wouldn’t you feature this attribute as prominently as possible?  Why wouldn’t you place it front and center on the can, so even the most casual of passer-bys can get in on the fact?  Heck, why wouldn’t you go so far as to scream it from the top of some place very high?… anyway, I’d have less to say and be far more pleased with the packaging if the fact that this drink is in part powered by GHAA were advertised better.  As is, it leaves the need for someone to fill in the blanks.

Hybrid tastes like—red berries.  Kind of like it says on the can, funnily enough.  Anyway, no real surprises here.  The flavors are very well balanced, with strawberry leading the way and gradually metamorphosizing into red raspberry, with a general tendency to be more tart than sweet, but never overly so.  All in all, it is quite delicious, and should please the palates of berry lovers and energy drinkers alike.

One thing I can say for certain—Hybrid will not let you down when it comes to kick.  Klr Bz products deliver a very nice energy experience—best described as a smooth, solid boost.  It’s clear that Klr Bz was formulated with the goal of bringing the drinker to an optimal level of functionality, rather than simply getting them jacked up on caffeine (not that I especially mind getting jacked up on caffeine from time to time, but still…).

While I’m sure it deserves some credit for contributing to the high-functioning buzz, I think the major contribution of the GHAA is apparent in the Hybrid’s longevity.  This drink lasts the better part of five hours, with the initial intensity diminishing very little over that time, and ending with no semblance of a crash whatsoever—in fact, I’d almost say it was an inverse crash, because I felt quite a bit better off than I had before I drank it.

My final word: Klr Bz—Hybrid is an awesome all-around energy drink.  What more do I need to say?  It has few peers in terms of its berry flavor, and delivers the energy goods with the best of ‘em.  Whether you’re a berry lover or an energy drinker or just a person who sees it on the shelf and is curious, know that Hybrid comes with my highest recommendations.