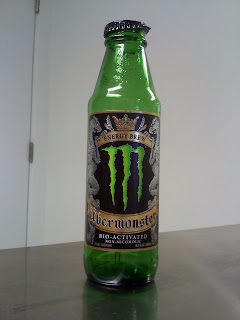 Best guess is about 169 mg, if the caffeine content per ounce is the same as a regular Monster.

The Monster Energy Company has traditionally been a little inconsistent with pushing  their new products.  With some, they arrive virtually everywhere overnight (i.e. Absolutely Zero, Rehab—Lemonade), and with others, it takes them a while to creep into commonality (i.e. every other beverage of the Rehab line that isn’t Lemonade).  Übermonster is one of the latter, and you can expect it to be on the hard-to-find side of things, at least for a while.

I have gone crazy over the packaging of many Monster products—Heavy Metal, Import, Rehab—Orangade…but none of these compare with what Übermonster comes in.  I mean, look at the pic…do I need to say anything?  Look at that satin label, with the highly detailed griffins, the black gold, the wide-mouth green bottle—I’ve said this before, but this drink sets a standard when it comes to packaging, and other energy drinks are going to have to step up if they ever hope to be noticed in the same refrigerator as Übermonster.  My only complaint is the lid—I hate pry-off lids.  But since I love the rest of the bottle so much, I’m not going to say anything beyond that.

With most reviews I’ve read, little information is given beyond the fact that this stuff tastes, more or less, like the original.  Well, I don’t know about everyone else, I wasn’t really expecting anything new—just a different take on the same flavor that Monster’s so loved for doing.  Turns out that this is the case—the flavor is classic Monster, but there are a few differences that I really appreciated.  First of all, it’s a bit sweeter, but it’s not really a sugary sweetness—even though it’s sweeter, it is far smoother than the original.  In addition, you get a small degree of effervescence lingering in your mouth once the initial fizz wears off, which I found to be appealing.  When it comes down to the flavor, I’d put it on par with Import.  Very enjoyable.

So Übermonster lives up to the hype when it comes to taste and packaging, but how does this “bio-activated” energy technology we’ve all read about and looked forward to hold up?  Well, having drank it twice now, I have come to the following conclusions: 1) it is stronger, 2) it lasts longer, and 3) you don’t experience nearly as much of a crash when it isn’t your second energy drink of the day and you aren’t completely caffeinated out by the time you drink it.  Speaking now about my second (and I believe more representative) experience, about five minutes had passed after I drank the bottle before I became infused with a very healthy degree of energy, and another five passed before I found myself buzzing all over the clinic where I worked.  No shelf of pet food was too difficult to move, no canine too difficult to hold so as to allow the doctor to check his ears, no cat so feral that I couldn’t get it boxed up for its spay.  Yes, Übermonster is a potent beverage that delivers a very enabling kick, and I’d say it met expectations quite nicely.

I’d gauge Übermonster’s longevity as being somewhere between 5½ and 6 hours—and, as I mentioned, no crash.

So…how does Monster’s new, über-hyped drink hold up to scrutiny?  Well, putting it simply, I quite liked it.  I appreciated the new take on the original flavor, I appreciated the intensity of the kick, and I loved how long-lived it was.  Given the fact that it’s pretty pricy (I forked out $4.25 for the bottle), I don’t think it’ll be a beverage I revisit with frequency, but for the occasional hankering for a Monster, I think it’ll do nicely.