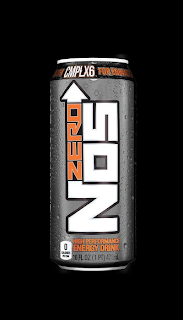 NOS Zero is essentially just a replacement for NOS Sugar Free, which was never as popular as any of the others.  One or two stores are bound to have it nearby, but you might have to make a couple of stops before you can get your hands on it.

I really do love the new can NOS is releasing their zero calorie beverage in—enough that the one I bought has been sitting on my desk, rinsed and clean, serving as a decoration for the last couple of days.  The old can was sort of a gold standard in bland—lots of bare aluminum and watered-down text.  Gone now is the silver of the bare can, replaced by an attractive mid-grey highlighted excellently by nuances of orange and black.  Particularly noteworthy is the quadrate orange “ZERO” placed cleverly within the logo proper, which gives it an edge lacked by the NOS Sugar Free (which contented itself simply with the words “sugar free” in black, bland lettering).  All in all, this can was an excellent move on NOS’s part, and one sure to revive interest in the beverage…now I only wish I could say said interest was completely deserved.

NOS Zero is (so far as I can tell) the exact same beverage flavorwise as NOS Sugar Free—which I consider equal to the original NOS in terms of agreeability (notwithstanding a slightly watery texture that I didn’t appreciate all that much).  Essentially, it tastes like a soda made of passion fruit and guaraná—and if that sort of thing appeals to you, I can all but assure you that you will love NOS Zero.

Here is where things go terribly, terribly wrong with NOS Zero.  I’ve always loved the idea behind NOS—you would be hard-pressed to find something so caffeinated for so cheap so easily as NOS, which has always made it kind of a wonder beverage in my book.

NOS committed its first offense by discontinuing the old version of their bottled beverage, which sported a whopping 359 mg of caffeine, with a new version containing the (for NOS) standard 260 mg—so you got the same kick as a can, but for more money and with more HFCS.  I could have overlooked that (so far as I’m aware the bottles aren’t even available anymore, so the “new formulation” therein is kind of a moot point) if they did not now have this atrocity to answer for—NOS with only 160 mg of caffeine per can.

What were they thinking?  They have taken what was once a great idea and a solid beverage and have drained the very essence out of it.  Sure, it still tastes very good—but there are plenty of beverages out there with roughly the same caffeine content that taste even better—if I want a boost that’s on the high end of average, I will buy myself a Monster Rehab—Rojo Tea or Monster Rehab—Orangeade over this any day, no contest.

I assume that NOS’s rationale behind this is to expand its appeal to more caffeine-sensitive crowds and in so doing boost their revenue—but they have sold their souls to do it.  What’s the point of having a purebred if you’re just going to neuter it?

Three and a half hours.  No crash, but no enthusiasm here either.

NOS Sugar Free might have been packaged bland, but in terms of functionality it is still head and shoulders above this new version, which is essentially a sheep in wolf’s clothing (though admittedly a tasty one).  Take your beverage back, NOS, and don’t you dare show yourself again until you’re bringing Zero back with 260 mg of caffeine.