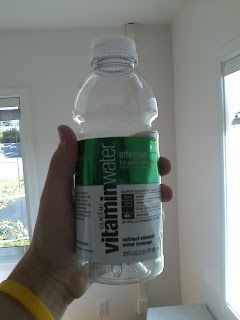 Can be found wherever Vitamin Waters are sold—which is virtually everywhere, with the possible exception of…nope, they sell them there also.  Never mind.

Empty (as is pictured) it looks pretty bland, but filled with the deep red liquid comes in it, it actually looks alright.  Nothing earth shaking, mind, but it looks vastly less like the bottle of glorified sugar water that it actually is.

Really, this isn’t all that great.  It’s a lot less sweet than the “Energy” flavor, which is a plus, but at the same time, it’s fairly light on the flavor and tastes like stevia—not the sort of thing that wins me over as a convert.

Better hope you’re caffeine sensitive if you actually expect a boost out of this, otherwise you’re fairly well out of luck—unless you can content yourself with something that is a mere vague semblance of caffeine’s potential effects.

Hour and a half, maybe.  No crash, but weak as it is, that’s hard to guage.

Better than Energy in terms of both flavor and kick, but still pretty lackluster.  My advice is to pass it over.