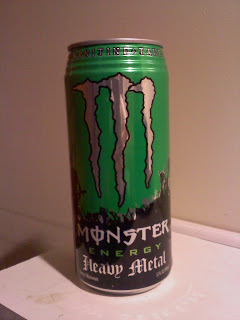 To start things off, I should let you know that if you plan on reading the entirety of this review, you will probably want to get comfortable.  I’m going to deviate from my normal format a bit and write this as sort of a review/memoir.  Given how dang near impossible finding Monster Energy—Heavy Metal was, actually being able to get my hands on a can and give it a shot was a bigger deal than it would have otherwise been, and it will consequentially be given a more extensive treatment.  That said, I will make an end to the preface and get started.

When I first got into energy drinking a couple of years back, I discovered a nifty website (energyfiend.com) containing, among other things, a sizable list of energy products with their corresponding caffeine contents.  Browsing said list, I found a product that for some reason intrigued me: Monster Energy—Heavy Metal.  Looking it over, I made a mental note to keep an eye open for it and went on with my life.  A few months went by, and after checking at every single convenience store, grocery store, and gas station I came to, not a bit of luck—nobody carried it anywhere, ever.  I knew it existed, or at least should—it was at the time on the Monster Energy website—but after a time the company discontinued the product, and I all but gave up on finding it until I finally decided to bite the bullet and bought a can on eBay. Moral of the story: this drink is, for all intents and purposes, impossible to find, and unless the Monster Energy company gets inundated with petitions to bring the beverage back (which I doubt), I don’t think it’ll ever get easier.  UPDATE (11-16-11):  In response to rumors concerning the acquisition of Monster Energy—Heavy Metal, I made a trip to Big Lots and found that, at least for the time being, they do stock it there.  If you're hoping to find it you should be able to do so there, though I'd act quickly; I doubt that supplies will last.

A look at the can should be enough to tell anyone why I became so intrigued to begin with—even next to Import, Heavy Metal sports probably the best packaging of any Monster Energy product I’ve seen.  The thing is a beast—the first thing you notice once you see it is the fact that it comes in a freaking huge 32 oz. can, and only then you see the motif…poison green background, metal concert silhouette in the foreground, Monster M and Heavy Metal logo repeating twice over the periphery of the can—it’s the kind of packaging that most energy drink companies scarcely manage to dream of, let alone produce.  Full marks to the Monster Energy company for this one.

The prospect of tasting Monster Energy—Heavy Metal had me a little apprehensive to begin with—the fact that reviews were almost universally negative aside, they were, for the most part, not helpful at all in giving me any sort of idea as to what I should expect tastewise.  One review described the taste as being a homogeny of body fluids gathered from the mosh pit of a heavy metal concert, another describing it as being akin to petroleum distillates, and in yet another (a video review) the individuals filming it simply pointed the camera at each other and called each other gay for five minutes before each giving it a sip and offering exceptionally vague critiques of the flavor.  Naturally, when the time came to try it myself, I did so having no idea what I was getting into.  Opening up the can, the first smell reminded me to some degree of NOS, but distinct all the same (it is interesting to note that the smell changed as I continued drinking…about halfway through it started to smell like my wife's mango/peach gum, and after that it took upon itself a pleasant fermented odor).  Taking a taste…it was equally hard to place; I was inclined to show some degree of mercy towards those who found themselves unable to describe it themselves.  Giving it my own shot, the taste reminded me of the tastes of grapefruit and lime, but without the sourness of either.  Strangely enough, I also tasted a little bit of salt in the mix—almost reminds me of limes sprinkled with salt.  While I can understand why some people wouldn’t be terribly fond of it, I have a hard time understanding the loathing some demonstrated for it.  As for myself, I found the result to be exceptionally delicious, and by far one of the most unique things I have tasted since I started energy drinking.

And now on to the kick…well, with 320 mg of caffeine, it shouldn’t come as a surprise that it wasn’t long after I finished the can that I found myself to be exceptionally energetic, and for a brief time felt almost uncomfortably so—even as diluted as it was, it’s still got a ton of caffeine, and isn’t for featherweights.  Also to be noted is the fact that the drink, with all its caffeine and its 32 oz. size, makes for a potent diuretic.  Take this into account if you plan on drinking it before a long drive, movie date, meeting, etc.

No surprises or disappointments here, either.  If you need to be wired, Monster Energy—Heavy Metal will keep you wired and functional for the better part of five hours after the fact.  Even as hardcore as the kick I got out of it was, I was quite impressed with the lack of crash after the fact.

Well, I for one am sorry to see this drink go.  I loved Monster Energy—Heavy Metal…I loved the tasted, I loved the kick, I loved how different it was from everything else I’ve tasted.  Concluding this review, I’m reminded of the song “Would You Love a Monsterman” by Lordi—I’ve tried Monster Energy—Heavy Metal, and I can indeed understand the beauty of the beast.  If given the chance, I recommend you try it, however big an “if” that may be….