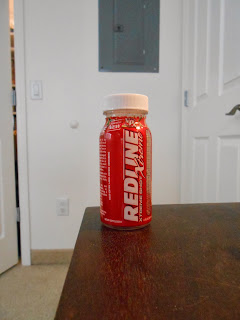 I can’t remember whether I bought this at Walgreens or Rite Aid—one of those drugstores.  Either way, it shouldn’t be too hard to find.

It is entirely appropriate that these should be found so consistently in drug stores, because as products they lie far more on the dietary supplement/drug end of the spectrum than the bona fide energy product end.  When it comes right down to it, they don’t really look all that much like energy shots—they’re not terribly flashy, there are no claims of energy awesomeness slathered haphazardly all over the label, and enough warnings, supplement facts, etc. to rival any non-steroidal anti-inflammatory drug on the market—and there’s really nothing wrong with that; I don’t think they should be viewed by the consumer as such.  Aesthetically, there’s not much to talk about; functionally all their ducks are in a row.  What more is there to say?

It’s times like these I think that VXP should consider releasing their Redline products exclusively as pills—for one thing, they are for all intents and purposes pharmaceuticals, and for another it would keep them from releasing products that taste like this.  There is something very perverse about this—watermelon is a happy, summery flavor, crisp and juicy and sweet and fit for all ages.  This…this is an apothecary of supplements and artificial sweeteners and flavors in watermelon masks prancing around and urinating drunkenly on your tongue (I think that’s about as vivid as I’ve ever been in describing a flavor—I like it).  Don’t be fooled by the innocuous-looking watermelon slice graphic wrapped around the top portion of the bottle—there only enough of a semblance of watermelon flavor in here to prevent the company form being charged with perjury.

And now…we get to the final and most conclusive evidence of the true, nature of Redline products.  Your standard energy products (ideally) tend to be geared towards making you feel awake, sharp, and focused, maybe even a little jittery.  Redline, on the other hand, goes way beyond that.  You feel the full supplemental blast of all 20-some odd constituents of the proprietary blend, much as though they were being administered in pure form via IV.  It sits like a pool of energy magma just beneath the surface, never erupting in full force, but slowly rising to the periphery as you shake and buzz and do whatever else it was you intended to do under its influence.  Take my advice and only drink half the bottle (I drank the whole dang thing), and only for prolonged, intense physical activity.  This really isn’t suited for anything else.

Another good reason to only drink half the bottle is the fact that the whole thing will last you seven full hours, assuming you’re as caffeine-sensitive as I am.  When it comes right down to it, most people don’t need seven hours of this kind of energy—unless, I guess, you are in really good health (see the label for contraindications) and are involved in construction or some similar career.

What am I supposed to say?  When it comes to supplements like these, speaking of the flavor as enhancing or taking from the overall experience seems kind of pointless; either you’re looking for dead serious energy or not—if so, I guess you could go with this or any other Redline shot, if not seek your boost elsewhere.