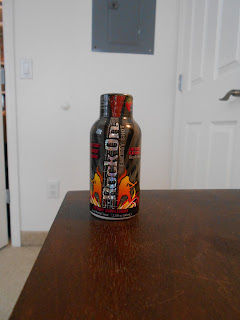 Available in packs of two at every Walgreens store.

This has the same handsome appearance as all the other Rock On shots—electric guitar, flashy lettering, etc.—but I take a point off for the use of the phrase “berry blast,” which is about as overused as you can get when it comes to describing something berry flavored.

While the aftertaste is still very bitter (bitter enough that I don’t plan on revisiting it on account of the taste alone), the ice does seem to bring out the berry flavor, enough that I can actually forgive them for calling it berry…and enough, maybe, that I can actually say myself that I believed them when they said it was.  One of these days someone will have to try the ice with one of the better 5 Hour clones (maybe that new SK berry shot) that doesn’t have any of the bitterness and see if they can actually get it to taste good.

For those of you who read my last review of a Rock On energy shot—is there really any need for me to reiterate that their kick sucks?  The fact that it takes a bit to get started would be forgivable were it not for the fact that the payoff is so lackluster—it’s not strong at all, just enough to make you feel a little more awake than you were before, and the longevity…wait.  Need to save that for the next section.

The longevity is far less than satisfactory—only two hours.  Maybe I would feel a little more forgiving in this regard if it weren’t for the fact that you can hardly feel the effects to begin with…two hours of mediocre energy is vastly more irritating than having no energy at all.

So while ice with the shot may be enough to make it palpable, nothing can save Rock On—Berry Blast from its mediocre kick.  If you really love these berry energy shots, buy an Eternal Energy shot from Wal-Mart—they cost a great deal less, and actually work better than any other 5 Hour clone I’ve had.