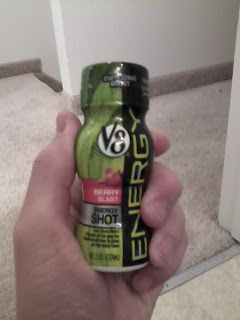 Bottle states something to the effect of “comparable to a cup of coffee”, which I’ve seen applied to caffeine contents as low as 80 mg or as high as 300 mg.  In any case, it has to be on the low end—I mean, the way low end.

Just hit up the juice section at your local Super Wal-Mart.  They carry these there.

V8 did a pretty decent job with the packaging on this one.  For once, I’m not put off by the shrink wrap—I was too busy enjoying looking at the tall, curvy bottle with its contrasting greens and blacks and the mathematic-ish pattern in the background.  This really does look pretty sharp, and stands out nicely against the shelves and shelves of blah surrounding it.

In terms of taste relative to other energy shots, this was revelatory—here was a shot that actually tasted good!  I won’t say it wasn’t without bitterness (as long as you shake up the bottle really well, you’ll only get it towards the end; if you don’t shake it up at all it’s the first swig that’s kind of medicinal), but like I said, it tasted really good.  If you like fruity, you’ll like the taste here—which is somewhat akin to mashed and super concentrated strawberries (I could almost imagine the shot screaming, “YEAH!  THAT’S RIGHT!  I AM ONE FRUITY SON OF A B*TCH!” as I drank it…which is a first).

As much as I liked the taste, it’s a real disappointment to say that this shot doesn’t work at all.  I was actually floored by how little energy was delivered—I drank it in the morning as I was showering, I felt a sort of pep well up somewhere in the background of my consciousness, and before I was off to school, I had to grab another shot to actually get me going.

The barely perceptible I mentioned pep lasted all of 45 minutes, if that.  Weak as it was, the longevity was pretty hard to gauge.

V8 might have come up with a palpable shot, but in the end, what could have been a major victory doesn’t really matter—in terms of energy, this one is a total bust.  V8, please take this one back to the drawing board.  Throw some extra guarana extract into the mix, maybe even some ginseng.  I would really love to love this shot, and if it is revamped to deliver a serious boost, I’d be happy to review it again—but as is, I’m going to have to tell the reader to pass this over, and I will do the same, hoping one day to find an energy shot that both tastes good and delivers legitimate energy.