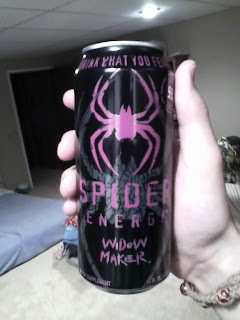 I’ve found that this (relatively) recent addition to the Spider line is as common as the rest—though unfortunately, the ‘rest’ aren’t so common, either.

As I have stated at length in past reviews, I really like the Spider motif—I mean, how can I not?  I don’t think I’m going to repeat my lengthy analysis just to avoid redundancy, but I will say I don’t like the maroon color used for the spider on this can—doesn’t jive with the hardcore look of the design itself.

It took me a while to figure out what exactly it was I was drinking when I started on Widow Maker—it wasn’t bad by any stretch of the imagination, but it was fairly…ambiguous.  About halfway through the can, I recognized it—pomegranate, with nuances of açaí.  It’s quite pleasant to be sure, but doesn’t stir up the strong enthusiasm that both Spider Energy and Lighter Spider did.

Even though I wasn’t terribly wowed by the flavor of Widow Maker, it’s very hard not to get enthusiastic when it comes to the kick—the challenge is stating anew what I’ve already said twice in a row now, but differently enough that the fervor is adequately communicated.  It suffices me to say that in terms of kick this is a Spider beverage to the core—in addition to the blasting away of any sort of residual fatigue, Widow Maker delivers a nigh unmatched degree of functional capacity.  There were jitters, also, but…they were smooth jitters, not the obnoxious, bounce-off-the-wall-and-annoy-the-everliving-crap-out-of-everyone-else sort.

I’ll be sticking to Spider Energy and Lighter Spider just because I prefer the flavor, but I would still not pass up an opportunity to drink Widow Maker, and consider it a wholly worthy addition to a spectacular energy drink line.  And…did I mention it’s only 99 cents for all that?