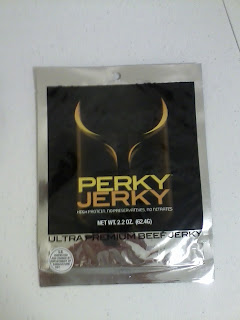 It’s…around.  Not the most common thing in the world, that’s for sure, but chances are it can be acquired from somewhere nearby wherever you happen to live.

I don’t think in a million years I could come up with something half so appropriate to caffeinated jerky as is this bag—just look at it if you doubt me.  It’s fairly minimalistic to be sure, but in the end, it’s the unspoken confidence that the packaging conveys that that makes it so effective—full marks across the board here.

Beef jerky quality is pretty variable, and you almost never know what you’re going to get—you have just as much a chance of getting what amounts to an MSG headache in a bag as you do something that’s pretty good, and occasionally, you do happen across a premium brand that reminds you why you like beef jerky so much to begin with.

That being said…HOLY FRICK THIS IS GOOD JERKY!

This is the good stuff—the jerky that’s made by people who really know and really care about beef jerky.  I recall reading somewhere that the guy behind this desiccated wonder took years to get it right—for the which I thank him, and affirm that it has payed off.

The organic soy sauce…the brown sugar…the spices…I don’t even know where to begin.  Everything is just so dang good and tastes so high quality.  I don’t even feel comfortable going further than that—go buy a bag.  Try it.

Got a decent little kick out of the bag—enough to really wake me up and even make me a bit jittery.  It felt more like I had downed something with 80 mg of caffeine than the 150 mg I’m told it contains—but that’s okay, because it’s really freakin’ good jerky.

Not especially long-lasting—I figure I got an hour and a half of buzziness out of it before the finish line rolled around, but again, that didn’t bother me in the slightest…and I think by now you know why.

In terms of performance, Perky Jerky would make for a fantastic mid-late afternoon boost, though it wouldn’t be my first choice for those cross-country drives people try to make on two hours of sleep.  All that aside, it is insanely good jerky, and for the taste alone is worth the $3.50 a pack.

Did I mention how fun it is to say “Perky Jerky?”

KEYWORDS: Perky Jerky review, all natural
Posted by Brandon J. Rose at 10:03 AM