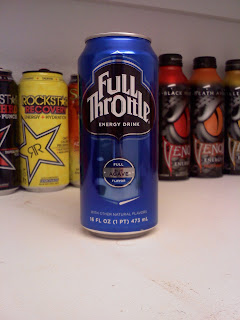 EASE IN ACQUISITION—8
Full Throttle—Blue Agave is pretty easy to come by, though they don’t seem to sell it everywhere they sell Full Throttle—Citrus.  You’re bound to come across it at one point or another.
APPEARANCE/PRESENTATION—8
Full Throttle doesn’t look bad in blue; I’d say it does the hardcore look of the original justice.
TASTE—6
The blue agave is apparently used for a couple of different culinary applications, including as a maple syrup substitute and as the prime ingredient in tequila.  People into that sort of thing seem to appreciate it, but I can’t with confidence say it makes a good energy drink—the flavor is sweet, to be sure, but also kind of syrupy and…I don’t know…musky?  Blue agave is just one of those things that doesn’t particularly lend itself to this sort of application.
KICK (INTENSITY)—9
Full Throttle—Blue Agave is pretty intense, if the slightest bit less than Full Throttle—Citrus.  Still, the difference is more-or-less negligible, so I’m not going to worry too much about it.
KICK (DURATION)—9
The kick is appropriately persistent and pretty representative of the Full Throttle line, which hit hard and don’t throw in the towel early.  You can expect a pick-me-up lasting about 4 hours or more.
THE DRINK OVERALL—8
However exceptional the kick (I can’t lie, it rocks in that respect), I would still shy away from Full Throttle—Blue Agave in favor of something else, just because I’m really not wild about the flavor.  Still, it’s not all bad, so anybody who needs a good boost and feels so inclined is welcome to give this a shot.  Who knows—somebody might like the stuff, even if I’m not terribly fond of it.