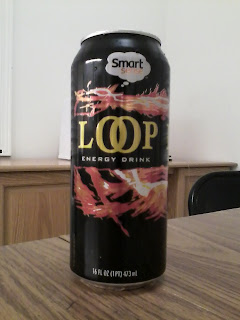 About once a year and for whatever reason, I’ll go into K-Mart and leave swearing in my wrath that I will never return.  It seems I always manage to forget that K-Mart is about as bad an idea as you can come up with—kind of like a big dollar store, except with worse value products than you’d find at smaller stores.  Somehow, however, I always manage to forget just why I hate it so much and will go in again—this time in search of new energy acquisitions.  Didn’t expect to find anything new, but there between the Rockstars and the Monsters (perhaps keeping them from beating each other up?) I found four K-Mart brand beverages under the name “Loop.”  They look about as bad as Rip It or any other dollar store energy drink, but I’m a reviewer, so naturally I had to buy up a can of each.

And now…it is night.  My organic chemistry test is done, and I’ve got lots of cleaning to do.  I do not need to get to bed early, but I am hoping to keep active tonight.  So what do I do?  Naturally, I try out the first of these—the original Loop.  Let’s see if I wind up cursing K-Mart and everything having to do with it and swearing to never return—at least for another year.

As common as the undead chain itself—while we’re on the subject of K-Mart, any idea how they’ve managed to stay in business?

Sorry, back to reviewing the drink.  Can’s pretty lame—double-faced with a bad print of what looks like one of those symmetrical ink things you’re supposed to identify in a visit to a psychologist’s office so they can assess your mental health.  Another low point is the name—what the heck does “Loop” have to do with energy?  There’s not even a lame energy paragraph on the side telling you, among other things, how the drink is the best thing anybody’s come up with since stone tools and why they elected to name it “Loop.”

Given that this drink doesn’t tell us what the flavors is, what do I expect?  Red Bull clone.  Popping it open and pouring it into a large glass of ice, what do I smell and see?  Red Bull clone.  Tasting it, what do I get?  Red Bull clone, except…different.  It starts off pretty average—closer than most clones to the original’s flavor, except maybe a bit heavier and less clean.  As I drink it, though, this quality disappears and is replaced by…I don’t know, palpability?  Bottom line is it gets better as you go through it.  If you’re a Red Bull lover and are trying to find a less pricy substitute, this might be something that appeals to you…though more likely you’ll just find it easier to get down than most other clones.  Still, it’s a decent enough substitute until Roaring Lion becomes available near you.  (NOTE: I didn’t see this until later, but this is a seriously sugar-laden energy drink…enough that I actually ran up and down the stairs for a half hour later on to burn it all off.  Drink sparingly.)

Loop also exceeded my expectations in this regard—I actually started buzzing as I was about halfway through it.  More than other bargain energy drinks, this one works, and should prove dependable if you’re in one of those situations where you need a solid, jittery energy boost and need it fast.

Okay.  It’s been about five and a half hours since I wrote the section on intensity, and it’s just now wearing off.  Is it just me, or is this weird coming from a store-brand drink?

So against all expectations, Loop has delivered.  I don’t know that I feel safe endorsing it as a regular in anyone’s energy drink regimen (if only for the sugar content it should be drank only occasionally), but I will say that it’s worth trying at least once.  As always, leave feedback—if my experience was a fluke, I’d like to know.