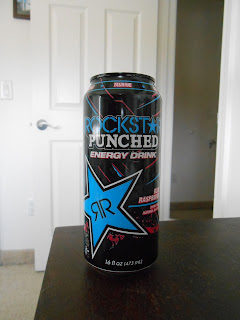 Where the frick did this one come from?  I was just wandering through my local grocery store last night, picking up a few groceries and generally minding my own business, when suddenly I come across this brand-new Rockstar.  I hadn’t seen any leaked photos, no reviews on other review sites, nada.  Not like Rockstar to sneak in under my radar like that.

I really do like the new format Rockstar’s been putting (with no particular trends) on their new drinks, with the outlined star and repeating Rockstar logo running in an almost 3-D fashion into the background.  The color choice here—black with faded red and blue—is a bit of an unusual choice in my mind; it looks a lot like something that you’d see at the Tech Noir dance club in The Terminator.  Still, on the whole I approve.

I should have known there was trouble when I first read the back of the can—280 calories per 16 oz. can.  Pretty bad even for a Rockstar.  Anyway, popping the top produced a rush of raspberry aroma—obviously fake, but still pleasant enough.  The first sips seemed promising—again, fake but agreeable.  By the time I was ¾ through the can, the wicked quantity of sugar I was putting into my system was proving itself far more than I could tolerate without feeling sick.  Slarging down the rest, I made my way home, took as much psyllium powder as I safely could (cellulose binds to the fructose half of sucrose and carries it out of your system), and began readying myself for the gym—to and from which I ran, and at which I burnt 560 calories on Jacob’s Ladder, which made me feel loads better.

What a freaking rush.  This kick is probably the strongest I’ve had in months, which shouldn’t come as a surprise given the 240 mg of caffeine and the 60-some odd grams of sugar I just got done bashing.  For a shaky, jittery blast, you really can’t get better than this—I’m almost thinking I might try it in a month or so (after a 30-day abstinence from simple sugars) just to experience that kick again.

That rush lasted me about five and a half hours, during which I managed to burn off all the sugar that surely would have ended in a disastrous crash.  Having intensely exercised during the fact, my energy levels simply dropped dramatically over the course of the last five to ten minutes or so.

What can I say?  As far as flavor is concerned it’s just as uninspired and pointless as heir recently released Super Sours and Punched—Guava, and nutritionally it is an absolute disaster.  The only thing that is keeping me from writing it off altogether is that glorious, caffeine and sugar-fueled kick, which is so much guilty fun that I can hardly stop thinking about it.  It really is a beverage for those with active lifestyles in function and out of necessity—unrelentingly intense to keep you going in whatever you elect to take on, but also bringing enough empty calories to the table that you might want to think twice (or more) if it’s not guaranteed that you’ll be able to burn it off and then some while under its influence.