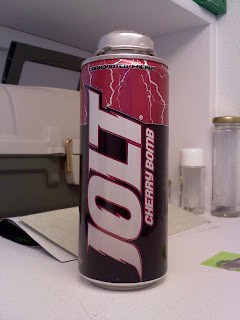 Pretty scattered in terms of where it can be found, though that may have something to do with the fact that it’s been discontinued.  I don’t know.  Just a thought.

The basic idea behind this particular generation of Jolt products is a battery can—long, black section, shorter section of varying colors (reddish-purplish, in this case), with a lid sporting a “+” sign in imitation of a positive terminal.  Overall, it’s a nice idea, even if the result is so-so.  Gotta say, the can fits quite nicely in one’s hand, which I consider to be to its credit.

I’ve had good and bad experiences with cherry-flavored energy drinks, so I approached this one with an open mind.  The first whiff didn’t make much an impression, so I decided to take a swig—it’s not good.  Think Cherry Coke, except particularly thick and syrupy, with a cherry aftertaste that I found to be pretty sickly.  The overall experience is pretty far south of agreeable.

One thing I can say about Jolt is that it should deliver just that—Jolt Cherry Bomb’s kick was pretty formidable…if you want something fast acting and particularly effective, this is certainly an option.

So…in case you haven’t noticed, Jolt Cherry Bomb is a very effective energy drink, though I’m still not particularly enthused about the fact.  It’s the taste…to me it was just sick.  Don’t get me wrong, I was pleased with the results I got out of it, but there are drinks that taste much better that will do the same job or better, which are preferable to having to choke down an entire can of this stuff.