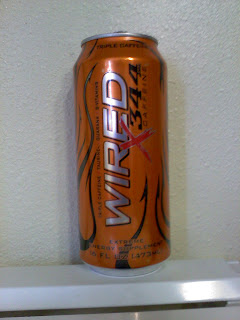 Wired X 344 has the same layout as all the others, with the vertical logo and the decal-style flames, except with an orange background and aluminum-colored flames.  That isn’t something to get all enthused over, but I really like the catch phrase printed in large letters just to the right of the front of the can: “MASSIVE CAFFEINE, MASSIVE ENERGY”—that’s how Wired X 344 really got my attention.

So from the label, I’m thinkin’ I’m going to get something orange flavored.  I pop open the can, take a taste, and…FRICK.  It’s a freakin’ Red Bull clone.  I’m all pumped because I’m about to drink one of the most caffeinated beverages I’m ever had, and this is how I have to start it?  Got to say I’m disappointed, and would have been even if they really managed to nail the flavor—which they didn’t; it tastes like they didn’t care what they wound up with as long as somebody who drank it could call it a Red Bull clone.

Alright, so the taste had me disappointed, now let’s move on to the kick, which is what I’m really wanting to write about.  This stuff is hardcore—not painfully so, as was Spike Hardcore Energy, but holy frick, they weren’t kidding about the “massive energy” thing.  I can only remember being this wired twice before, after having reviewed 130 other drinks.  How do I even describe it?  Well, let me just say this—I felt so energized that I thought that if I were to pelvic thrust in the direction of the nearest mountain, it would explode.  Yeah.  That’s about what it was like.

I got 5 hours of solid energy out of Wired X 344 before I crashed—and when you crash, you crash hard—maybe as hard as the kick initially hits you.  It’s a blast while it lasts, but I felt pretty frayed when it was over.

Yeah, I haven’t figured how to calculate an average when there’s only one energy category that scores a 10+, so let’s say somewhere above 9.  The taste is painfully uninspired, but this is a dang freaking fun kick to experience—while it lasts.  Take that into account, and drink with caution—this really isn’t a drink for pregnant ladies, individuals sensitive to caffeine, house cats, politicians, etc.