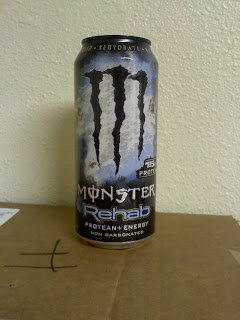 Not as common as Monster Rehab—Lemonade, but it still shouldn’t be too difficult to track down; chances are someone has it somewhere near where you live.

Whatever your feelings on Monster, you can’t deny they make a mean-looking can—the Monster M looks awesome in black, and the pale blues/whites contribute to the look very nicely—the colors actually look very appropriate for something containing protein.  Only problem I have with the packaging is that at first glance, it may be mistaken for Absolutely Zero—that’s what happened to me, but then again, I was looking through a foggy glass refrigerator door, so that might actually not be as big a problem as one would think.

Monster Rehab—Protean is…very interesting.  It has a somewhat fruity flavor from some fruit I can’t really place but did like, and then it’s got a very powdery texture I’m attributing to the protein (hey, get this…“protean” is actually a word!).  It’s mostly for this texture that the drink actually kind of turned me off a bit; the protein kept forming kind of a thin film of a mucilage-like substance towards the back of my tongue, which I kept having to get off.  I was drinking the drink slowly, though, so maybe that had something to do with it.  At any rate, it didn’t bother me all that much, but I can see how it would really turn some people off.

You know, this drink strikes me as a breakfast drink.  Maybe it’s the fruity, yogurt-like flavor.  Maybe it’s the fact that I drank it on an empty stomach and I found the result satisfying in the filling sense.  Maybe it’s the fact that from this drinking on an empty stomach in the morning, I’m getting the impression that this is a “get-going”-style drink, even though it’s listed as more of a recovery sort of drink to be taken after intense physical activity.  At any rate, I’m writing this section at the height of the drink’s effects, and I’m pretty wired.  This is a drink that hits fast and hits hard, and is the sort of drink you want to have to set the pace for the day.

The peak of efficacy lasted about an hour, and from there the intensity tapered off sharply—rather than wired I was simply awake and alert with only a small amount of residual fatigue nagging at me.  In this the majority of time spent awake was relatively unremarkable, but I still maintained a degree of functionality for about four hours or so after I first drank it.

While I like a drink that packs its heavier punch for a little longer, Monster Rehab—Protean is still a useful beverage, and, as I mentioned, good for a morning pick-me-up.  As for the taste, it’s going to be one of those things that you either like or hate, so approach accordingly.