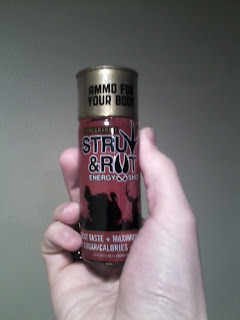 Found it at a gas station in Twin Falls.  I imagine this is the sort of thing that’d be big in these mid-size Idaho towns, so if you live anywhere near such a place, that might be a good place to check.

In terms of looks, this is basically just country décor made into an energy shot.  It’s got the colors, the hunting and wildlife themes, the shape of a shotgun shell…the effect is so complete that even the subtle vertical lines in the background accentuate the effect.  Now, if you know anything about country décor, you know that you can get one of two results—either it can look devastatingly tacky and trailer park-appropriate, or it can look homey and tasteful.  Same thing apparently carries over to energy shots, because when I look at this, I think of how appropriate it would be to find in the cupboard of a well-kept country home, perhaps alongside some harvest-theme coffee mugs (how’s that for looking into something?).

You know, I have to say that I actually enjoyed this shot.  Mind you, I have a long way to go before I find a shot that I enjoy as much as Rockstar Zero Carb or Venom Energy—Black Mamba or Monster Energy—Heavy Metal, but this is good enough that I can actually see myself intentionally trying it again at some point.  In terms of flavor, this is light years better than any other pomegranate shot I’ve had—there’s no fakeness or chemical harshness to it, just some sweet pomegranate flavor and fruity earthiness (almost akin to cranberries).  It lacks the tartness and intensity that really make me love the actual pomegranate fruit, but like I said—I’d drink it again.  Maybe the second time around, I’d pour it over a little crushed ice, just to see what that did for it….

You know, for a mere 100 mg of caffeine, this really ain’t half bad (funny how Microsoft Word still refuses to acknowledge ‘ain’t’ as a word).  It woke me up in a jiffy, and actually had me feeling jittering my way through my studies (while, of course, listening to “Tyranny of Steel” by Iron Savior repeatedly…some energy products just put me in that kind of mood).

The initially intense kick lasted only an hour or so, and thereafter was replaced with something more muted, though it still kept me awake for another three hours.  I do not recall a definitive crash after the fact, but after that time had passed I had a really easy time falling asleep with my daughter in my lap.

Like I said, I enjoyed this shot.  The taste was passable by energy product standards, and kick works well enough that I feel pretty safe recommending it (it seems especially appropriate in a crashing-at-the-end-of-the-workday sort of situation).  If you can find it, it’s worth the time and $1.99 to try it out.