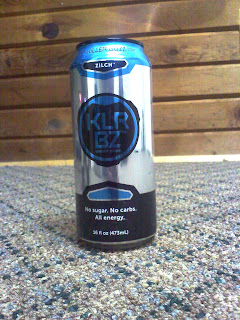 Give it time for the company to get it distributed.  Until then…good luck.

Thinking about what to say about the packaging on Klr Bz—Zilch…I involuntarily shrugged.  There’s not a whole lot to be descriptive about; it’s just adequate.  Blue looks good with black, both favor the design…and yeah.  That’s about it.

So for those of you reading a Klr Bz review for the first time, Klr Bz stands alone as an energy beverage that delivers the goods by including (along with 200 mg of caffeine and a bunch of other good stuff) a specific combination of amino acids called Giant Hornet Amino Acid.  I could tell you all about the stuff, but I think I’ll just quote the website: “GHAA, Giant Hornet Amino Acid, is a synthetic version of the secretion of the larvae of the Giant Asian Hornet. This secretion contains 17 amino acids that metabolize the fat stored in the hornet’s abdomen and turns it into energy, allowing it to fly up to 60 miles in a single day at speeds of up to 25 miles per hour—thus providing SUSTAINED ENERGY.”

Let’s say for a moment that, rather than being an energy drink reviewer, I’m a casual consumer.  I’m looking for an energy drink, and Klr Bz catches my eye.  As is, I’d say it’s about on par with other energy drinks out there; heck, it’s packaged even better than some in the mainstream.  But what I can’t tell just by looking at the can is that this drink rises above and beyond many a conventional competitor by its inclusion of this amino acid blend—and that’s because I can’t read it unless I pick up a can and turn it.  If this drink is going to do something for me that others won’t, you’d better be sure that you make that clear on the can.   I’ve liked the Klr Bz products I’ve had so far, and I’d really love to see this feature advertised much more prominently.

I like Klr Bz—Zilch.  Not as much as Klr Bz—Proto, of which Zilch is a sugar-free version, but still…more than most traditionally flavored energy drinks.  The balance of flavors is just right, the sweetness is perfect, it goes down nice and smooth…only real complaints are that it tastes slightly watered down and has some distracting artificial sweetener aftertastes.  I might stick with Proto, but there’s no reason not to pick up a Zilch if you’re counting calories.

In times past, I’ve found sugar free drinks to be more intense than their sugared counterparts. I’m not sure if it works for others that way…might just be exclusive to my physiology.  Part of the magic that is me, if you will.  Anyway, Zilch is no exception to that trend.  It’s still smooth, like all the other Klr Bz drinks, and still allowed for some exceptional functionality, but the lucidity it delivered was far more pronounced—which says quite a lot, considering just how tired I was after my 3-4 hours of sleep the night before.

Given how little sleep I had the night before, I was ready for work to kill me.  Didn’t help that my boss was in such a pissy mood that day, either.  Thanks to Zilch, however, what fatigue I experienced was residual, and I was able to make it through the first five hours of the day just fine.  Afterwards, there was no crash to speak of—though even Klr Bz can only do the trick on sleeplessness for so long.  But, my boss left the building after that, so I was able to just sit in my chair for the rest of the afternoon, take calls, and refill prescriptions.

If you’re anything like me, Klr Bz—Zilch will deliver some seriously impressive energy, and all with a delicious flavor and zero calories.  And, if you’re not like me…hey, it probably will still deliver some impressive energy, and all with delicious flavor and zero calories.  Dieting?  Want energy?  And flavor?  Get Klr Bz—Zilch.