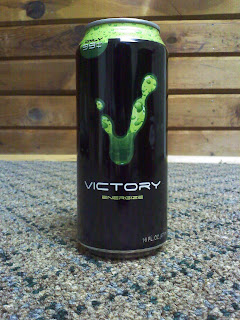 Making a stop at one of my usual energy haunts recently, I had good reason to believe my decision to pass by had paid off—from the entrance, I could see a pair of new energy beverages waiting amongst the others.  Even before I was close enough to open the refrigerator, however, I knew there was something extraordinarily familiar about the whole scene—an obvious Red Bull clone, and a fruit punch flavored drink…ah, yes, I had seen this before.  The company behind this line of drinks, called “Victory” was doing nothing more or less than knocking off the Knockout line.

For those of you unfamiliar with Knockout—let me give you this crash course—it is one of the most painfully uninspired energy drink lines ever to exist.  The laughably named “Original” is a carbon copy of the original Monster Energy, and the low carb version is a desperate stab at Monster Energy—Absolutely Zero; the only other flavor in the line is the crap fruit punch flavor—which is probably the only thing flavor that has the potential to be as unexciting as a Red Bull clone.  To add insult to injury, they even steal the 99 cent price tag from Knockout and slapped it on their own can.

This sort of thing happens with energy drinking—or just about anywhere in the corporate world.  Just as surely as you have people out there being bold, trying new things, looking to take things to the next level, you have shlocks who just want their piece of the pie, but aren’t willing to do anything innovative (or effort-expending, for that matter) to do it.

Anyway, enough ranting.  Let’s get on with the review.

None listed, much to my chagrin.  Best guess is the run-of-the-mill 160 mg—which would be consistent with the half-hearted nature of this line.

Not terribly common at this point, but I’m guessing that soon enough we’ll be seeing it pop up more and more.  As to whether that’s a blessing or a curse…I’ll leave that call up to you.

Not offensive, but by and large fairly unexciting—unless you’ve got an eye you’ve trained to recognize and zero in on new energy drinks, you’ll probably wind up passing it over.  Can’s black with a Monster-esque green letter in the center (V rather than M) in the center.  Nothing else to report.

Victory may have stolen the idea for their own line from Knockout, but at least I could logically see myself drinking Knockout in the future, in the event I was in the mood for a Monster but had the option of paying less (just for the record, I don’t consider the scenario likely—I may have a hankering for a traditional energy drink-flavored drink from time to time, but if I’m going to act on that, I’m getting myself a Monster Import).  Victory’s flavor is just that of a shoddy Red Bull clone—nowhere near good enough to justify their use of the horrifically banal flavor.

So after all my venomous ranting, I am forced to concede—Victory works.  And it’s not the cheap, bargain-caffeine buzz that infused me with a vehement hatred for the Rip It line.  It’s honestly a good buzz—the kind I cannot help but recommend.  It’s a bit slow getting started, but ten minutes or so after drinking it, I was very awake and satisfactorily jittery.

In this respect, Victory…(swallows, almost chokes on pride) also performs very well.  The effects hardly changed over the course of four hours, though after this, it did wear off somewhat quickly—though with no noticeable crash.

So in spite of my undying distain for the idea behind the beverage, I’m forced to concede, albeit grudgingly, that it does work, and works well.  I’ll personally stick with other beverages, but if what I’ve said here doesn’t turn you off to Victory…well, at least let me know what you think.